Chasing Amazing is looking at Mark’s favorite Amazing Spider-Man covers this week. Today, we look at choices #2 and #1. 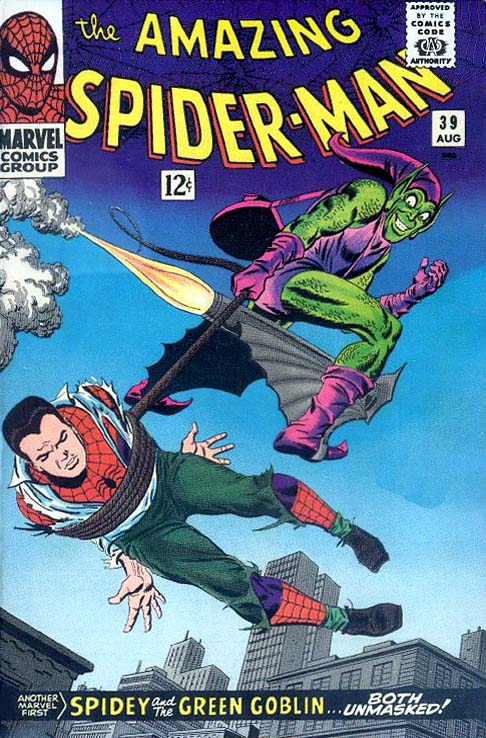 In a list that openly omits Amazing Fantasy #15, I’m going to go out on a limb and say that I bet most of you predicted that this cover was going to make the top two of my list. I guess the only question was would it be #1 or #2? I gave the runner-up spot on my list to ASM #39 primarily because that’s what I was feeling on this given day. In reality, this submission and the eventual #1 are interchangeable for me.

So why do I love this cover? What don’t I? It wasn’t the first time Spider-Man appeared unmasked on the front cover (ASM #12 has that honor) yet this time, the danger seemed more imminent. More real. The Green Goblin had been harassing Spider-Man for many issues, and to see such a helpless looking Spidey/Peter Parker, tied-up and hanging, unmasked from the Goblin’s glider is a terrifying visual. The fact that issue declares that both Spider-Man and Goblin would be “unmasked” gives this iconic scene even more clout.

This issue also marked the dawn of the Romita era in Spider-Man comic books. Romita’s Spider-Man remains the most iconic artistic interpretation in my humble opinion and the fact that his very first issue was this masterpiece only adds to the man’s legacy. For you baseball fans, Romita’s first effort was the equivalent of Mark McGwire smashing 49 home runs his rookie year. What can you possibly do for an encore (see the first entry in this list to find out!)?

Prior to this issue, Spider-Man, Peter Parker and the Goblin never looked so realistic. Peter looks like an actual teenager, yet his rippling muscles also give him the exaggerated “oomph” needed to resemble a superhero. The Goblin looks psychotic and murderous, which is a major upgrade over that mercurial jester-treatment from Steve Ditko’s pen.

But this is not about criticizing Ditko or even other artists who came long after JRSR. This is about celebrating a phenomenal artist who gave me some of my greatest memories of Spider-Man, despite drawing the bulk of them decades before I was born.

Which leads me to … 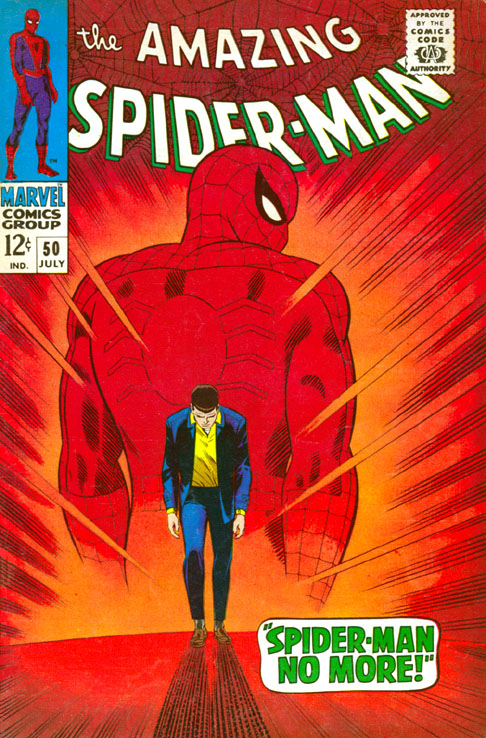 I could be clever and in the spirit of Stan the Man just write, “Spider-Man No More, ‘nuff said.” And who out there would argue with me? Can you really think of a better-looking, more iconic Amazing Spider-Man cover out there? A piece of comic book artwork that has really only has two rivals when it comes to homage covers, and that’s Amazing Fantasy #15 and Action Comics #1?

The cover brings a certain level of fragile humanity to Peter Parker/Spider-Man that we never saw before. He’s turning his back on being Spider-Man, but he looks utterly depressed doing so. And at the same time, isn’t that Spider-Man turning his back on Peter Parker, yet also throwing him one last lingering glance as if to say “are you sure about this?” In that vain, when I look at this cover, I don’t necessarily think of “Spider-Man” but instead “Peter Parker.” It would be years before “Peter Parker” had his name on top of the bill in a Spider-Man comic book.

Similar to Peter being unmasked on the front of ASM #39, ASM #50 wasn’t the first time it was implied that Peter Parker was done being Spider-Man. But unlike earlier occurrences, there was something just so dramatic about Romita’s work here that for an instant, the reader might actually consider a world without Spider-Man. It’s totally emblematic of a character that’s constantly struggling between the great power he holds as a superhero versus his responsibility as a regular teenager. And for long-time Spider-Man readers, that internal character-driven struggle is what hooked us on the series in the first place. Has there ever been a more unwilling superhero than Spider-Man?

And that’s what makes Marvel comic books stand out ahead of DC when it comes to the big-two. Especially during this era where Marvel was introducing waves of new characters, with interesting and complex back-stories. In Superman, you rarely cared about Clark Kent. Bruce Wayne was just too brooding to identify with – plus he was rich, so he could always buy his happiness. Yet as a Spider-Man reader, you honestly cared about Peter Parker and his family. When he realizes his responsibility for the death of his Uncle Ben, your heart breaks with his. When the serum to save his Aunt May is just out of reach, you want to stretch that extra inch with him. When Gwen Stacy is thrown off that bridge, the shock was just unimaginable. ASM #50 is my favorite cover because it captures the emotional interplay between reader and character in one iconic image.