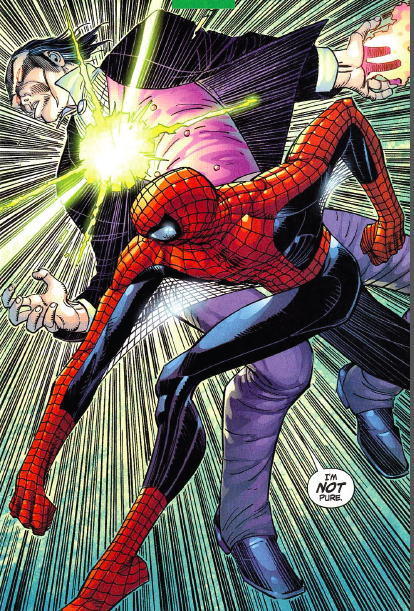 Amazing Spider-Man’s J. Michael Straczynski era kicked off with one of my favorite storylines of all time and, as such, the first entry in my “stand up and cheer” series. While recent ASM writers have moved away from the whole “Spider Totem” theory that JMS put forward, I still thought it was a very interesting approach with the character – a way to be both daring, but to still operate within the established parameters of Spider-Man’s universe. By that point, everyone knew the origin story of Spider-Man – Peter Parker is bit by a radioactive spider and gains spider-powers – but challenging whether or not those powers were actually innately part of Peter was a real mind-bender.

But what made JMS’s first foray into ASM even more successful was the villain he introduced during the storyline (ASM Vol. 2 @30-35). Morlun was a supernatural being that fed on the energy from these “totems.” Believing Spider-Man to be one of the most pure totems in existence, he relentlessly hunted Peter in order to completely drain him of his lifeforce. JMS borrowed the old formula Roger Stern successfully used in his “No One Can Stop the Juggernaut” storyline – Spider-Man having to use all of his mental and physical resources to overcome an otherwise unstoppable force – but there was something so overwhelmingly intense about Morlun that I think an argument could be made that JMS’s tale tops Stern’s. I know, it’s blasphemous, but that’s how much I love these issues.

For one, because he was a brand new character, the reader had no idea that Morlun could even be stopped. While Spider-Man was up against overwhelming odds against the Juggernaut, X-Men readers could certainly cite examples of when the supervillain was actually defeated. And while Spidey’s ongoing struggle against Juggernaut justifiably exasperated him, Morlun seemingly put fear into the heart of Spider-Man, something I don’t recall seeing so prominently in any previous issues of ASM. 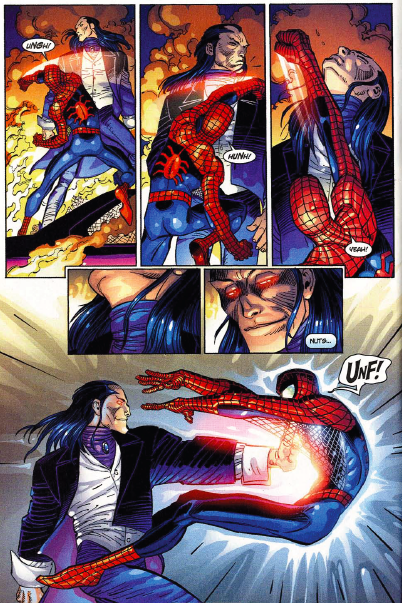 After initially trying to take Morlun down head-to-head and realizing the villain actually was getting stronger with every punch and blow, Spider-Man resorted to a tactic he rarely ever took – running. Morlun began attacking innocent people to draw Spider-Man back out of hiding as Peter’s sense of responsibility took over. When Spidey’s new ally Ezekial joins the battle and is seemingly killed by Morlun just as the tide looks like it’s going to be turning, the odds are further stacked against Peter.

Then there’s the phone call scene between Peter and his Aunt May in ASM #34. May has long been a source of inspiration for Peter, bringing the best out of the character in some of ASM’s finest moments-ever (more on that to come). However, when Peter calls May moments before he’s ready to face the music and take on Morlun, his words are heartbreaking. He’s essentially saying good-bye to his beloved caretaker because despite his inner-strength and never-say-die spirit, he doesn’t believe that this is a battle he can survive. 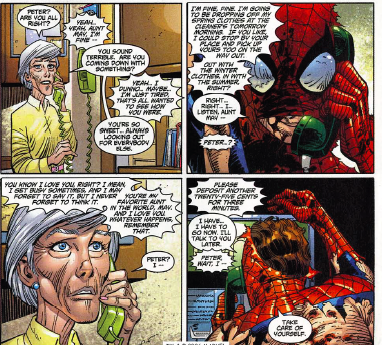 And yet, it’s Peter’s brain that saves the day and ultimately produces the “stand up and cheer” moment. Knowing that just the touch of Morlun drains him of his energy, he risks his life and ingests a dose of radiation. When Morlun is on the attack, the jolt of radiation temporarily saps him of his uncanny strength because Spider-Man’s totem powers are no longer “pure.” It’s such a rewarding moment, because in addition to Peter overcoming a physical imposing adversary by using his intellect, the use of radioactive energy harkens back to the earliest roots of the character – despite JMS essentially challenging the status quo earlier in the storyline about the genesis of Spidey’s powers. 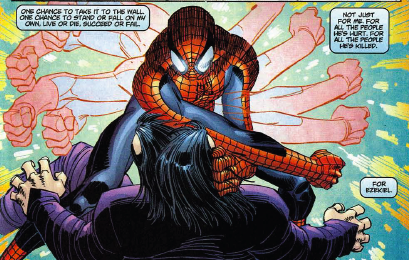 So by the end of the storyline you have Spider-Man overcoming an unbeatable foe using his superior intellect, while Peter’s most human/relatable characteristics – his sense of responsibility and sacrifice, his love for family – or on display. Adding to this storyline’s legend is the fact that it’s a brand-new writer for the title, bringing a fresh voice and approach. I consider these issues modern classics, and without a doubt, a personal stand up and cheer moment for me.