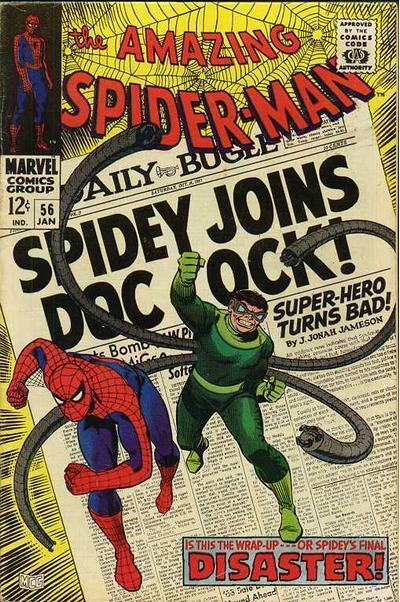 I’ve been emotionally connected to newspapers for as long as I can remember. Going back to those silly little essays you’d have to write in elementary school about what you wanted to be when you grew up, I always wanted to be a journalist. And while a journalist means many things these days, when I was a kid, a journalist was somebody who wrote for newspapers.

Spider-Man and newspapers have also been connected from the get-go. Dating back to Amazing Spider-Man #1, J. Jonah Jameson, the editor of the Daily Bugle newspaper, was using the front page of his publication to slam Spidey as a menace. While Spider-Man has fought super-charged villains like Green Goblin, Sandman and Doctor Octopus, his greatest, most persistent antagonist has been Jameson and his crusade of Spidey slander in the Bugle.

I have always thought of ASM #56 as the “newspaper” issue. That’s not because Jameson and the Bugle play an especially large role in the plot – the Bugle had been slamming Spidey for being criminal for years at that point so when Peter Parker has a legitimate case of amnesia and is unwittingly assisting Doctor Octopus in the theft of a device known as a nullifier in ASM #56, JJJ’s hysterics seems almost repetitive. But from a presentation standpoint, this is the first time I can think of where ASM used the Bugle newspaper as a dominant artistic element on the comic’s front cover. Spider-Man and Doc Ock look like they’re leaping out of the newsprint here – true interactive media decades before print went into decline and was forced into producing audio, video, blogs, etc. 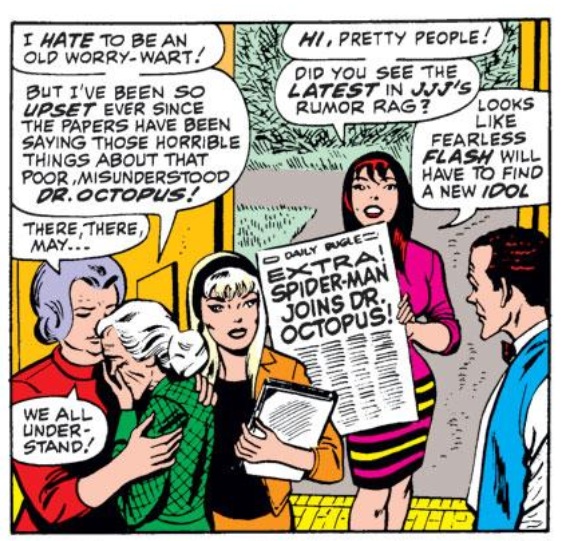 Because of this cover, I’ve long been fascinated with acquiring this comic, which is also significant for being the first appearance of Captain George Stacy, a police officer and father of Peter/Spider-Man’s girlfriend Gwen. In high school, I started writing for the school newspaper as a freshman and instantly sought trouble. Not quite grasping the concept that heavy-duty investigative journalism required actual investigation rather than conjecture and wild speculation, I tried publishing an article about what I perceived to be “rampant” marijuana use by students. The article raised red flags all the way up the chain of command, from the paper’s faculty advisor to the principal. I kept shielding myself behind my “first amendment rights” and “freedom of the press.” Eventually I was called into the superintendant’s office where I was told to drop the story or prepare to be buried. I dropped the story, but I still felt like I emerged victorious. I was 14-years-old and had attracted the attention of the school’s superintendant with a news story. That’s pretty cool.

I was so hell-bent on becoming a newspaper reporter that even as I was applying for colleges, I was eyeing schools that specifically had majors or concentrations in journalism. I was told by advisors and guidance counselors to stay open-minded with my education, but I knew what I wanted and as followers of this blog have probably figured out, it’s hard to knock me off course if I’m determined to do something. I went to college and joined the student newspaper, which, due to student apathy, needed to be revived from the dead. When the university brought in a staff member who had real-life big-city journalism experience, I latched on to her, begging to be mentored. She gladly obliged, testing and challenging me, helping me to secure an internship at a big market New York-area newspaper, which gave me the practical experience to eventually earn my first full-time job directly out of college at a small daily newspaper in Connecticut. It wasn’t the New York Times or the Washington Post, but it was an honest-to-god journalism job. I had made it. Fortunately my editor wasn’t J. Jonah Jameson, though I did end up working with some pretty big comic book fans (more on that in another remembrance). 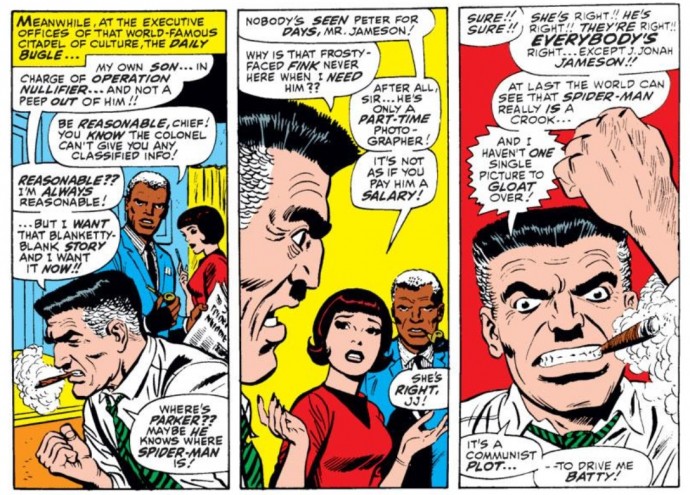 But throughout all of my scratching, clawing and climbing through the newspaper industry, ASM #56 remained uncollected. The first time I caught sight of that cover was around the time I was causing a stir with my superintendant in high school. I was flipping through the price guide section of Wizard magazine and the cover image was randomly inserted under the Amazing Spider-Man section. Its inclusion made me think it was a really important issue. Regardless, the “newspaper” issue was instantly on my “must get” list just because of that cover. Even if I was never able to achieve my goal of collecting every issue of Amazing Spider-Man, I figured ASM #56 would have to find its way into my hands one day. Because I was going to be a newspaper reporter. 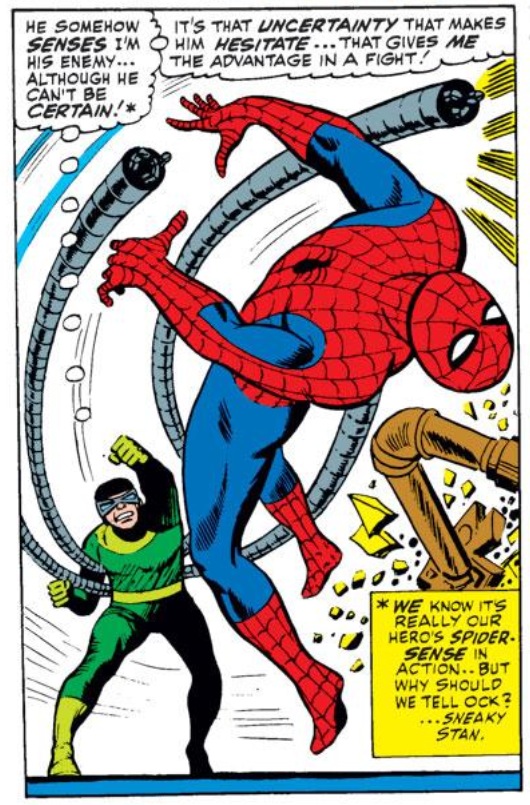 Life is funny. Without getting into specifics, let me just say that one of the big negatives about working in newspapers is you’re not well-compensated. I believe the rationale is, you’re doing such a fantastic public service and the work is so rewarding, that the pay is a secondary concern. And for the first few years of my professional life, that rationale held true. But as financial issues continued to grip the industry, a lot of that good work and overall “fun” of the job were being sucked out. There was less emphasis on quality writing, and more on quantity of writing. As reporters left the paper for other jobs, those spots were never filled, increasing the load on the existing staff. 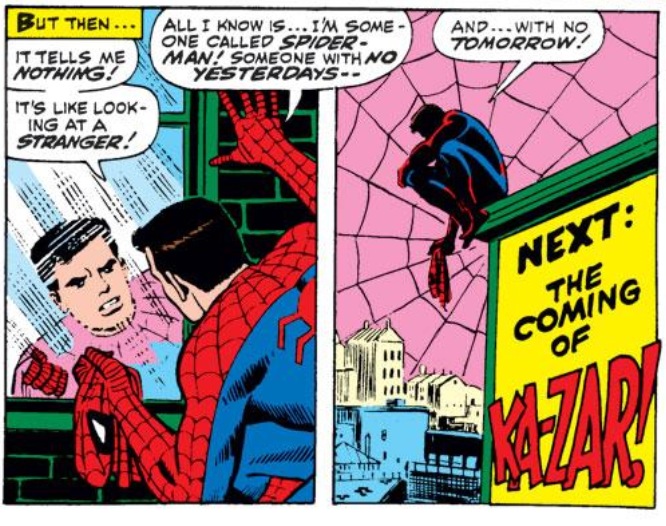 I eventually hit a breaking point and sought new opportunities. And with these new opportunities, I started to be paid like a real human being, not some kind of “for the love of the craft” people. While there were certainly other factors, one of the main reasons I was able to really start making a dent in collecting the older issues of ASM is because, quite bluntly, I now had some more discretionary income to do it. With that discretionary income, a few years ago, I FINALLY stumbled upon a copy of ASM #56 that I found online. While it’s Daily Bugle cover will always remind me of my childhood ambitions to be a journalist, it wasn’t until after I got out of journalism I had the desire and means to pick it up. So now, I can look upon this issue with a bit of nostalgia for a phase of my life that has come and gone. And I can also be thankful that I’m now in a position where I’m not making a choice between rent or comic books.