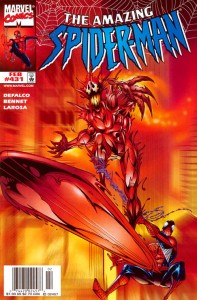 As a collector with a very narrow focus on one specific title, I’m constantly seeking the best deal available. But oftentimes, I get subjected to the whims of the marketplace. If an issue of Amazing Spider-Man is in high demand and thereby has a seemingly inflated price, I sometimes just got to eat my vegetables and pay it, though I know some collectors out there are going to cringe at the idea of me settling. Have I also mentioned that I’m a terrible negotiator?

My acquisition of Amazing Spider-Man 431 is a story that’s more about me “lucking out” and emerging “victorious” against the whims of the market for a change.  It’s also a story for all would-be and current collectors out there to never fully dismiss the contents of the “bargain bin” at a comic book store or show, because every once in a while you’ll find a legitimate bargain.

But let me start by attempting to connect the dots and understand why an issue that only came out 1997, that contains no significant first appearances or life-altering events for Spider-Man, would be so overvalued in the first place. Like a lot of collectors at the time, I stopped buying comics in the late 1990s. For me, it was because I was getting later into high school and I wanted to spend my money on other things. The Spider-Man series was also in the midst of the clone saga, which may go down as one of my least favorite storylines of all time. You can reference that for now here (though at some point I really need to break down my hatred of this storyline further since it temporarily drove me out of collecting).

For the rest of the world, the late 90s marked the end of the comic speculator boom. As collectors realized that many of the comics they had picked up were not going to magically accrue in value and be worth thousands of dollars, they left the industry in droves. Marvel was so badly damaged by the fallout that they filed for bankruptcy in 1996. However, during this time they were still publishing comics, but with lower circulation numbers. As a result, a lot of the comics published during this span just seem to be much harder to find, and as economics 101 will tell you, low supply and increased demand equals higher prices. 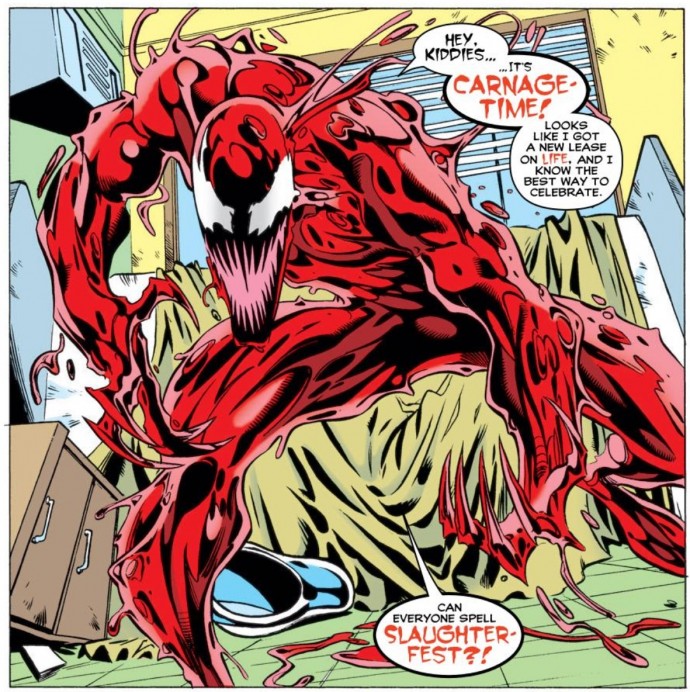 Of course, I didn’t realize all this until well after the fact. About four years ago, after pretty much securing every ASM comic back to #200, I set out to fill some of the more recent gaps, including a number of issues in the mid-400s and some in the inexplicably renumbered “volume 2” (which for arguments sake let’s just consider part of the 400s since Marvel returned to the original numbering in time for ASM 500). Whereas I found I could fill most gaps in the 200s and 300s by ordering small “runs” of about four or five books from eBay or from other online retailers, I had no such luck for the 400s. I had to buy a lot of these comics individually and the prices seemed outrageous. Granted a $10 or $15 for a comic is nothing when I’m dropping much more than that currently for the remaining issues in my chase, but for a book that had come out less than 10 years ago (at the time) that just seemed obnoxious.

Two issues that were especially prickly for me to track down were ASM 430 and 431. These comics immediately raised a few red flags as a collector – they featured Carnage, an one-dimensional serial killer villain, but one who had developed cult status and even his own mega-crossover a few years earlier, “Maximum Carnage;” and the two issues prominently featured another Marvel superhero, the Silver Surfer. So those who were lucky enough to get their hands on these issues when they first came out during the low-circulation era, were able to take advantage of the appeal for Carnage and Surfer, making these issues even more expensive. 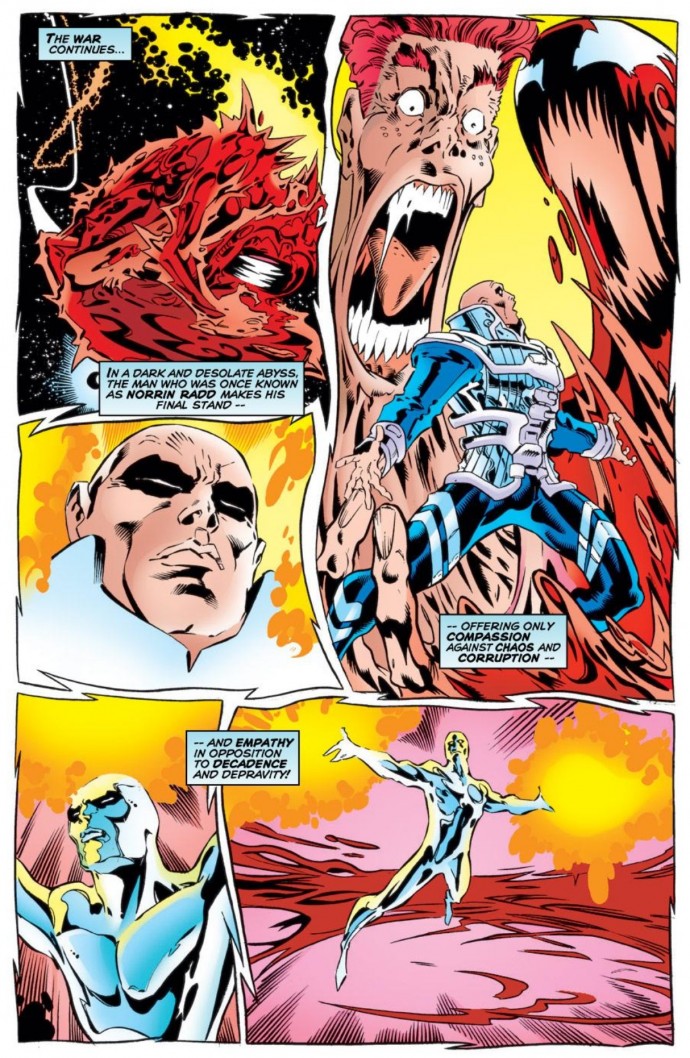 I’d search the buy it now section on eBay and see the few people who were even selling copies were charging more than $20 for either of these issues. I’d check auctions and while I would end up paying less, by the time shipping costs were tacked on, it seemed like too steep a price to pay for a single comic. Especially since I always thought Carnage as a villain was ridiculously overrated (so he kills without conscious and introduced a wave of ultra-violence into Marvel comics. Whoopee) and I had little to no attachment to the Silver Surfer (Fantastic Four fans would probably disagree with me there).

Actually, for people who appreciate this storyline, I’m downplaying it. In an event that should have been more significant, but just seems tired to me in retrospect, that blasted alien symbiote I keep writing about, left its host Cletus Kasady, the serial killer who became Carnage, and merged with the Silver Surfer. This was a pretty deadly combination as an alien with a dead-red murderous streak essentially co-opted a demigod with cosmic powers. So I’m sure there’s a curiosity out there for some on the collecting side. But for me, I was done with alien symbiote stories about 50 issues before this came out. 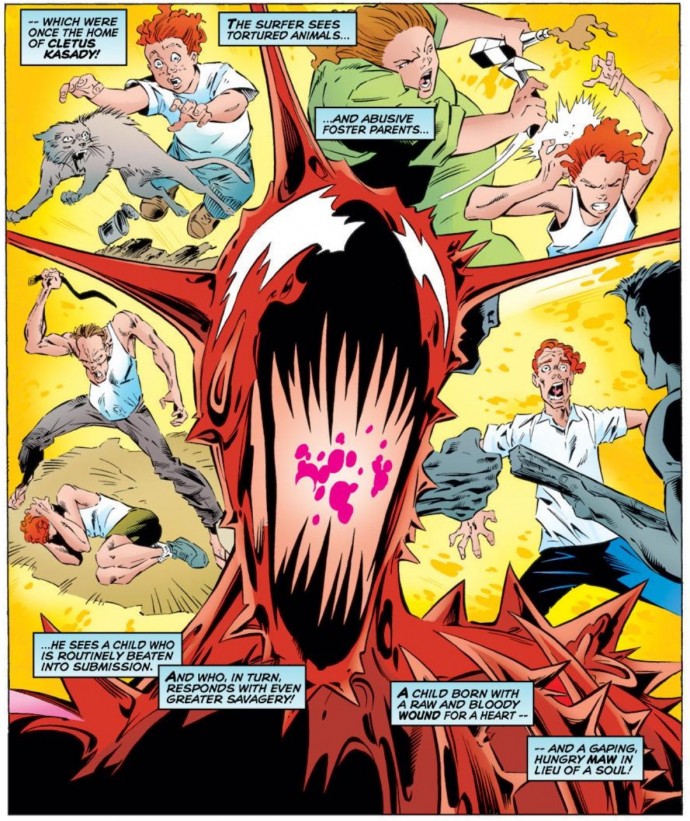 I was ready to bite the bullet and pounce on the next copy of ASM 430 or 431 that was available at one of the online retailers I liked to buy from, justifying the exorbitant cost to myself because I would be combining it with a few other comics, thereby saving on shipping. I just wanted to be done with all of the ASM’s in the 400s so I could start moving on to the older and more exciting to find (and buy) issues.

But I was just patient enough. I had plans to check out a local comic book show, so I decided that would be my last resort before I settled. Thinking that I’d still have to spend more than I wanted for it, you can imagine my shock when I was digging through somebody’s “All Comics $1” box and just lying there was a copy of ASM #431. I nearly yelped, but held it back so as not to draw any attention to myself. As if the seller was going to grab the comic out of my hands and be like “how did that get in there?” (though, I guess you never know). 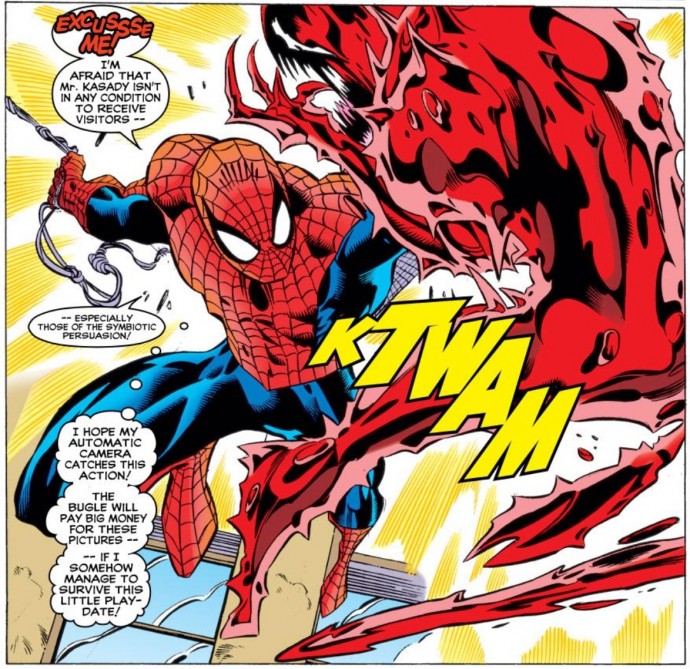 In anticipation of this post, I just re-read the story arc again and I still think the whole thing is a little silly. There’s the obligatory, Peter “quits” being Spider-Man panel that lasts all of a page, and despite the idea that a symbiote-controlled Silver Surfer should be absolutely terrifying, Spider-Man was able to take him down long enough for the symbiote to rejoin Cletus and become Carnage. Then the Surfer “freezes” Carnage in stone, so he can ponder all the wrong in the world he’s caused. Okay then.

I definitely regard the late 90s as the “dark era” for Amazing Spider-Man in terms of quality and content, as the series really didn’t pick up for me again until J. Michael Straczynski joined the comic as head writer in 2001 (coincidentally, around the time I got back into collecting full-throttle).  But hey, it doesn’t bother me how middling ASM 431 was. Because I was able to pick it up for $1.