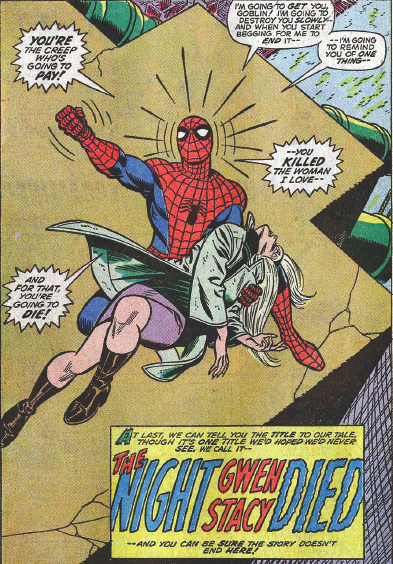 I wanted to refer you to an enjoyable read over at The Capital in Annapolis, MD, which hits upon a point that currently has a lot relevancy in the world of Chasing Amazing: the “death” of superheroes.  “Death,” of course goes in “quotations,” because as the article aptly notes, “death” in comics is almost never permanent:

Such is the life – and death – of superheroes and the reason the demise of a beloved character doesn’t garner even more angst among collectors. “It just happens so much. Death in comics is such a constant,” said Steve Anderson, owner of Third Eye Comics in Annapolis.

And heroes never really die, they just fade away. Briefly.

Currently, the Amazing Spider-Man universe is dealing with death with the demise of the Johnny Storm/Human Torch. With Spider-Man joining the Fantastic Four/Future Foundation and replacing his good friend Johnny, a brand new comic book series that is concurrent with the Amazing Spider-Man universe has been released, piquing my interest as both a fan and collector. So I’m obviously a little curious to see how permanent Torch’s death is, because it will ultimately impact Spider-Man’s involvement in the FF series. Needless to say, if FF goes back to being the Fantastic Four again, sans Spidey, my interest in buying the series on a regular basis is going to wane.

The Capital article quotes some comic book fans who say superhero deaths are a perfect way to repackage an outdated character and to eliminate their baggage. It also doesn’t hurt sales for publishers and shopowners:

The Torch blew himself up to save the other three members of his team. Anderson usually sells about 100 issues of each Fantastic Four comic. He sold 700 when the Torch was extinguished. For the record, Johnny Storm has yet to regain his spark.

A senior Marvel executive outright admitted recently that angering the fanbase is a surefire way to create interest in the product. You can’t argue with the results. But this attitude has also made me very fearful of what Marvel may attempt to do with the Amazing Spider-Man. He’s one of their longest-standing and most popular characters who has been cloned and seen his marriage dissolved by the devil in past controversial storylines, but never outright killed. Does that make Spidey a prime target for Marvel’s Sword of Damocles?

If you go by Marvel’s alternative “ultimate” universe, it’s already happening. Peter Parker/Spider-Man is being killed off and the Ultimate Spider-Man series is getting a reboot. Outside of ranting about the polybag giveaway being associated with the death of Spider-Man issue, I can’t say I’m feeling any emotional distress about this Marvel decision because I’ve never been into collecting the “Ultimate” series. You might as well be telling me they’re killing Hulk or Wolverine because my connection to that character is nonexistent. I know this logic sounds impractical to nearly anyone – Spider-Man is Spider-Man – but you got to trust me on this one. Ultimate Spider-Man doesn’t matter.

But if they killed off Peter Parker in Amazing Spider-Man? I’m terrified of that possibility, even if death is as temporary as it has been for comic book legends such as Superman and Captain America. While some may see the idea of “killing off” a superhero as a means to an end, I see it as being lazy. It’s the comic book writing equivalent of painting yourself into a corner – there’s nowhere else to go, so you just burn the house down and start all-over again. Death is never meaningful, unless it’s permanent. I still, to this day can’t accept the current incarnation of Norman Osborn/Green Goblin as a legitimate supervillain in the Marvel universe because they had him dead and buried for so long, in such spectacular fashion, that his resurrection towards the end of the Clone Saga in the 1990s was absurd. But the deaths of Peter’s Uncle Ben and his girlfriend Gwen Stacy are significant milestones because they’ve remained permanent. The death of Uncle Ben taught Peter/Spider-Man his greatest lesson, “with great power comes responsibility.” The death of Gwen Stacy ushered in an era of comics where the stakes and consequences for all of those involved in the superhero universe were seemingly higher.

When DC killed off and subsequently resurrected Superman in the 1990s, what was ultimately accomplished by that decision? Sure, it ticked off a bunch of comic book speculators who bought and hoarded copies of the “Death of Superman” issue because they thought it was going to be worth a ton of money, but other than that, was the world of Superman that dramatically different where his death went on to mean something? If I’m sounding ridiculous here, please correct me.

And if Marvel decides to bring back Human Torch (maybe about a year after they killed him, in time for Fantastic Four #600?) what will be the purpose of that editorial choice? Will the FF issues co-starring Spider-Man have simply run their course leaving Marvel with the need to reboot one of their oldest series in order to generate some buzz about the Fantastic Four again? Wouldn’t it be something if Marvel stuck to their guns here and kept Human Torch deceased? Sure, it may shock readers who have come to suspect an inevitable resurrection, but it would also be an extraordinary stand by Marvel to say “yes, our writers can do better than that.”