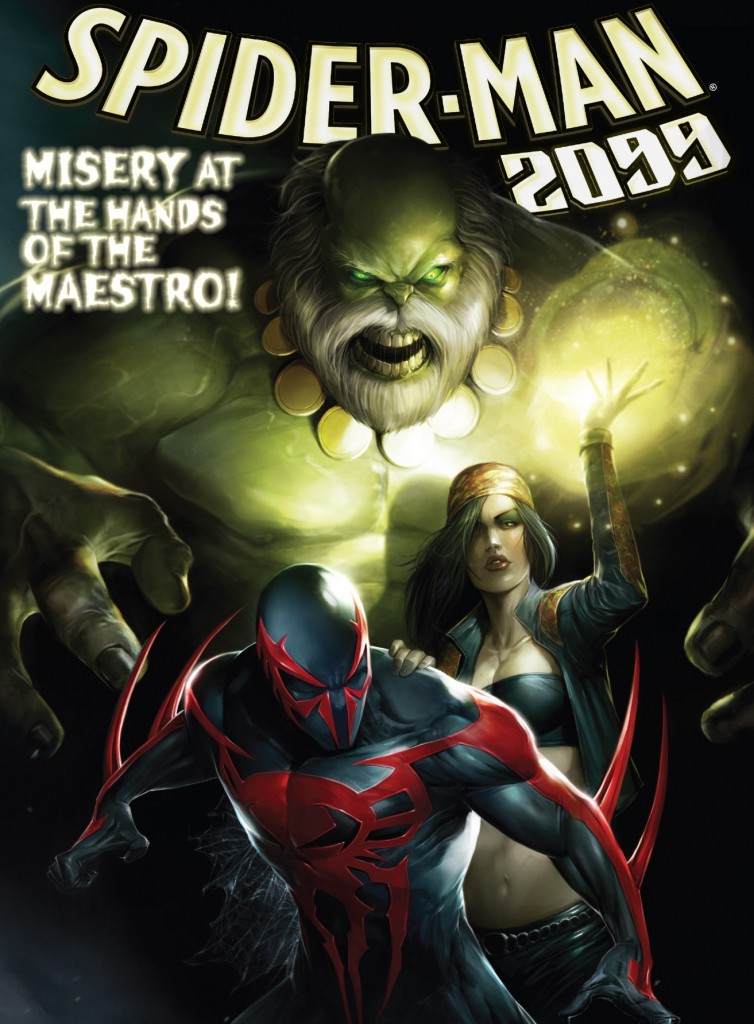 You know what many of the Spider-books have been collectively missing for nearly a year now? A compelling villain that leaves the reader breathless as he or she speculates how the hero (whether it be Spider-Man or someone else) can possibly overcome the odds and succeed. Which is just a shame considering how Spider-Man’s rogue’s gallery is just jam-packed with memorable bad guys.

Fortunately, we have Peter David, Will Sliney and Spider-Man 2099 to save us from this seemingly endless assembly line of uninspired villains in our Spider-Man comics. Granted, David is mining one of his own creations from the 90s, Maestro, from Hulk: Future Imperfect to drive the drama in what looks to be the final arc of Spider-Man 2099 before the series either ends or goes on Secret Wars-hiatus this summer. But if David reaching back and incorporating his own creations from yesteryear is how we’re going to get a memorable superhero vs. supervillain showdown in a Spider-Man comic book this year, I’ll take it. 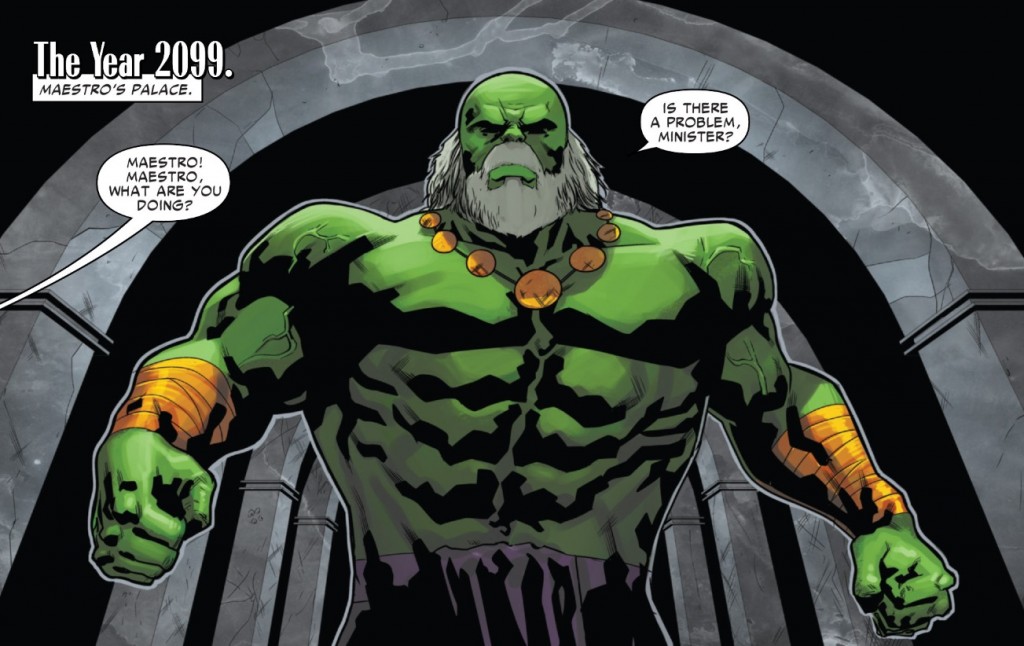 Regardless of the fact that I expressed disappointment last month in how Spider-Man 2099’s plot shifted away from the 2015 timeline that David and Sliney had initially established (and that David promised would be returned to in the comments section of this blog a few weeks back), the past two issues of 2099 have been among the very best of this very consistently good series. Spider-Man 2099 #10 seemingly kicks the tension and despair to a whole other level – one that I didn’t think the book was capable of doing this close to its presumed end – and establishes a storyline that has consequences that could extend far beyond the confines of David and Sliney’s series. 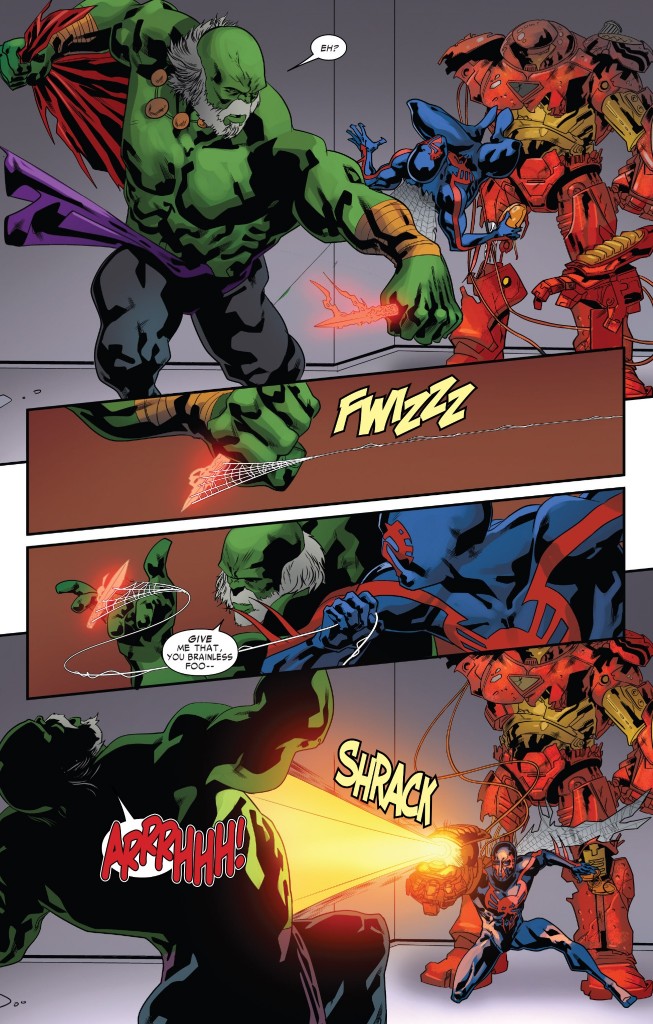 In an effort to go back to 2015 so he can fix his future 2099 timeline from the past, Miguel has unwittingly become a pawn in a larger master plan that has been designed by Maestro – a future version of the Hulk that has shunned his humanity as Bruce Banner and instead embraces his full monster side (while also retaining Banner’s smarts and cleverness).

As a result, Spider-Man 2099 #10 is filled with misdirection and subterfuge, whether it be the identity of Doctor Strange 2099 or the fate of Maestro and his time machine (which I’m assuming is something he stole from Doctor Doom and/or Kang upon defeating them). But all of these reveals and bait and switches are paced with such precision and tact, that it left me desperate to find out what exactly Maestro has up his sleeve and what evils away Miguel upon his return to 2015? 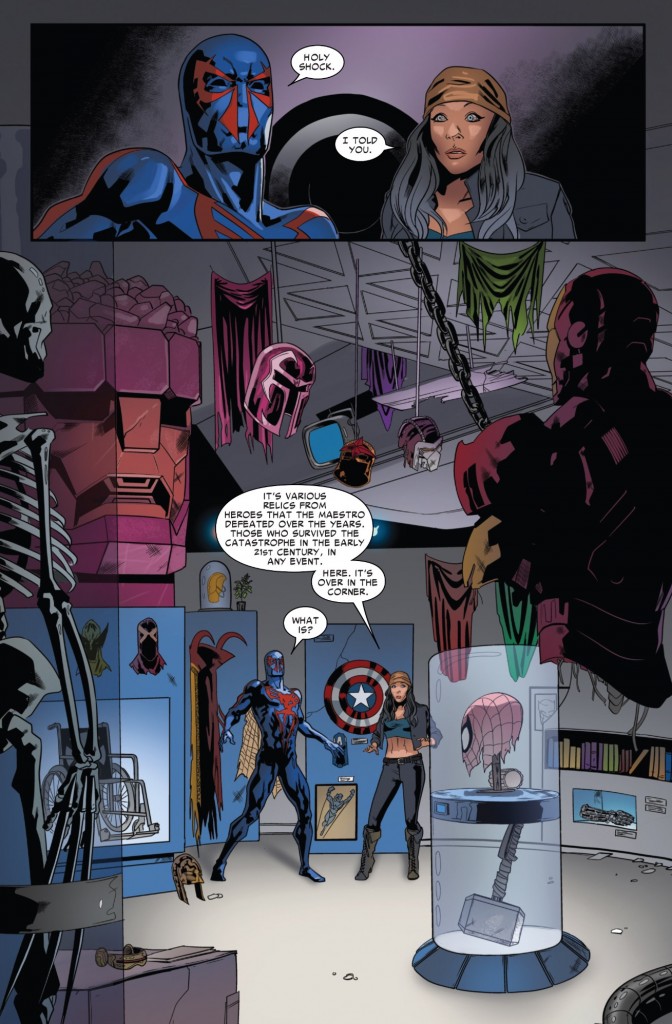 Even without the assistance of having read Hulk: Future Imperfect, the complexity and brilliance of Maestro’s evil is captured so wonderfully by David and Sliney throughout this issue. It’s patently clear that this is not a character that can be dispatched via some snarky dialogue and a few well-time punches and kicks. Maestro has plans for his plans, and is playing chess while his adversaries are all playing checkers. His cunning and intelligence lends credibility to the fact that this character was able to conquer so many heroes and villains of the “Heroic Age” – so much so that he has an entire trophy room dedicated to things like Iron Man’s armor and the Hood’s cloak of invisibility.

But Maestro’s intellect and masterminding abilities do not come at the expense of Miguel. By that I mean, whereas sometimes a creator will pump up a villain by diminishing the attributes of the titular hero, David here honors all of his characters and their distinguishing qualities. Miguel is still being depicted as a savvy who is not afraid to get his hands dirty if the ends justify the means. But the Maestro is just that much more diabolical, that Spider-Man is easily overmatch and outwitted by him. It’s not a discredit to Miguel, he just can’t compete, which makes the comic that much more harrowing. 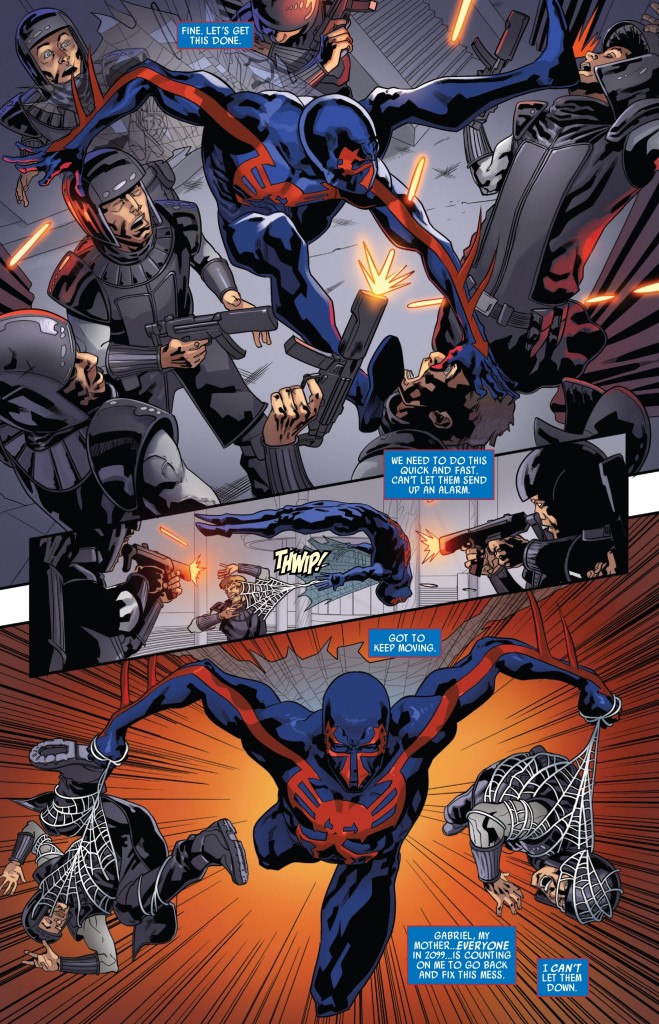 I’m not going to pretend to have a clue as to where this story is going next outside of the fact that I’m assuming Maestro is going to somehow follow Miguel back to the present day, which will likely have huge ramifications on the fabric of time (and in a comic book universe where the Multiverse appears to be collapsing within on itself, that’s not a good thing). That’s the beautiful thing about what David and Sliney have created here with this 2099/Maestro arc – I don’t want to waste my energy guessing when whatever situation I come up with will just likely be less satisfying than what the next issue ultimately delivers.