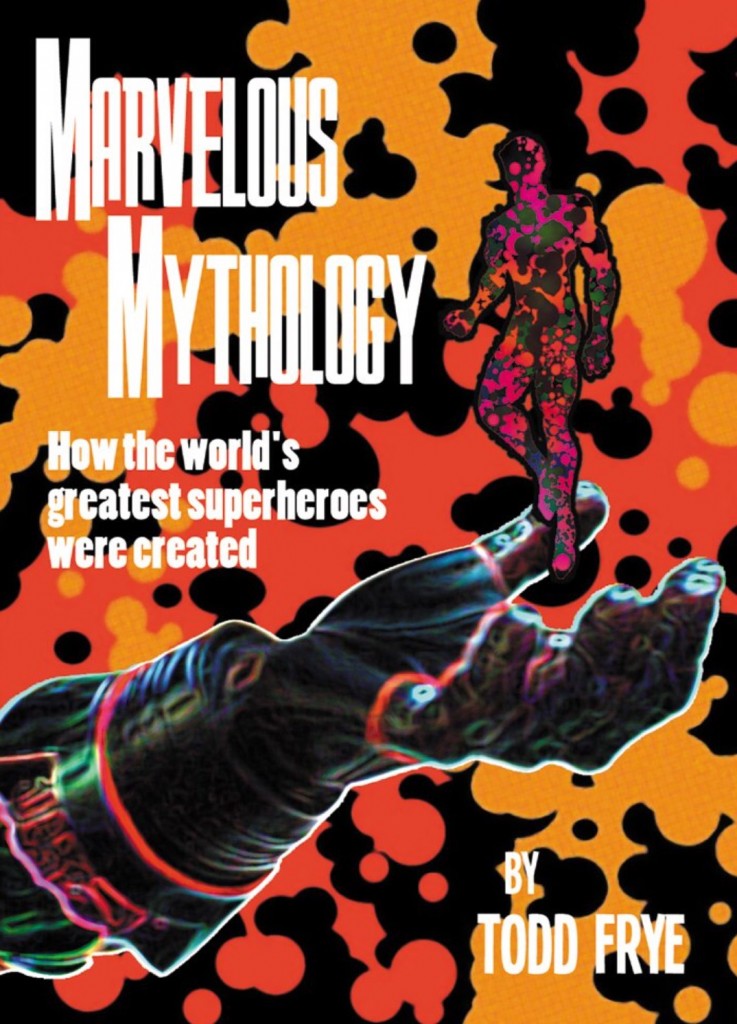 This past year might have been the big 75th anniversary for Marvel Comics, but Marvelous Mythology, a new book by Todd Frye which is available in eBook format now and will be released in hard copy on January 20th (online only), is a fun little stroll down memory lane that hones in on the era of comics that most superhero readers tend to care the most about – the dawn of the “Marvel Age of Comics” in 1961 with the publication of Fantastic Four #1.

Frye frames FF #1 as the “big bang” of sorts for Marvel Comics – and it’s hard to argue with him. Despite the fact that the Fantastic Four today appear to be languishing as a franchise (which may, or may not be driven by a larger battle between Marvel Studios/Disney and the current cinematic owners of the FF, 20th Century Fox), Fantastic Four #1, which Frye correctly notes was born out of Marvel’s need to keep pace with DC who had just launched the Justice League of America superteam, dramatically changed the company and the industry forever.

Marvelous Mythology does a good job demonstrating exactly why the onset of the Stan Lee/Jack Kirby space opera was such a dramatic moment for superhero comics, providing analysis about some of the tropes and themes that would become standard fare for the “House of Ideas” in the 1960s: tragic heroes with pronounced flaws and personality defects; unique and engaging villains; teammates who fought like family members; and an overall diverse cast of characters that included blacks, whites, women and teenagers in central roles.

In fact, part of Marvelous Mythology’s charm is the fact that Frye is clearly a fan of the content he’s writing about. He breezily transitions between the Fantastic Four, Hulk, Spider-Man et al. touching upon the Silver Age highlights and lowlights of each character, and discussing why certain storylines or individual issues were so important to the larger medium. It’s not an academic study, which provides a sense of levity and casualness, as if you were talking to a friend about a certain comic and that friend so happened to know a lot about Marvel Comics. As such, Marvelous Mythology is also unintimidating and accessible source of a storied company’s storied history.

At the same time, it’s also difficult to find anything terribly new or unique about Frye’s account of the “Marvel Age.” It’s a thorough book, and it’s always appreciated to have a streamlined source of information that also features a few personal embellishments (certainly, as a blogger who writes about 40-50 year-old Spider-Man comics, I can appreciate selling an article on the strength of your voice and personal insights) but I can’t say it adds anything more to the conversation than what Sean Howe’s fantastic 2012 book, Marvel Comics: The Untold Story (which Frye cites as a source for Marvelous Mythology), already accomplished. Like Frye, Howe trains his focus on the dawn of the “Marvel Age” but also heavily sources his book with interviews from editors, writers, artists, et al. As a result, Howe’s book is more of the “inside baseball” variety, where fans get to see how the sausage is made for better or worse, while Frye’s is more of a general appreciation for how the sausage tastes after the fact.

Of course, an overly gossipy book like Howe’s does come with its flaws. I know I found his book to be a little too hard on Stan Lee (and later the Jim Shooter era, which is described as a “reign of terror” of sorts), seemingly jumping on the bandwagon that Stan was nothing but a shyster while Jack Kirby and Steve Ditko and co. did all the work and got none of the credit. Marvelous Mythology certainly touches on the “how much credit do Kirby/Ditko deserve” quandary which continues to plague comic book enthusiasts to this day, but does so in a way that is far less mean-spirited and petty towards Lee, who regardless of what happened to Kirby/Ditko over the years, still deserves credit for having the initiative/vision to transform Marvel into the juggernaut it is today.

If Frye’s book has one very pronounced flaw, it’s the overall pacing of the narrative. Marvelous Mythology spends ample time in the early 1960s – and rightly so since this was when some of the most important characters were created – but the timeline appears to jump haphazardly once Frye runs through all of the Silver Age big guns. He touches upon Bronze Age creations like the All-New X-Men (aka, Wolverine, Nightcrawler, Storm, Colossus, etc.), but not with the same level of depth as he spends on Spider-Man, Hulk, Thor and the FF. Frye also abruptly fast forwards to the modern era in order to discuss the Guardians of the Galaxy – obviously prompted by the success of last summer’s movie – but the sequence feels out of place for a book that’s so thoroughly steeped in the Silver Age.

Frye’s sometimes selective look at history also makes what was ultimately omitted – i.e. the politically drama of the Shooter era, the excesses of the 90s, the company’s bankruptcy, its resurgence under Joe Quesada and its multimedia branding via Marvel Studios – all the more pronounced. So in that regard, Marvelous Mythology would have probably benefitted from a few more hundred pages, just because I would be interested in see how Frye tackled these topics.