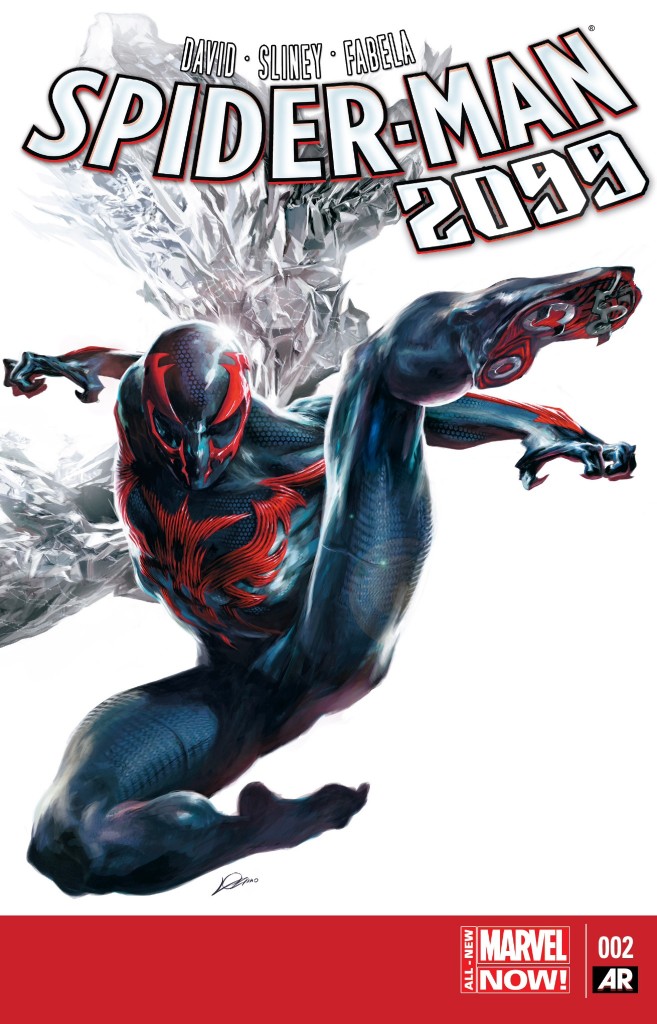 There’s a sophistication in how Peter David weaves humor into his stories that’s hard for me to articulate, but is unquestionably different than anything else I read on a weekly basis. Don’t get me wrong – the comic book marketplace is filled with funny books whether it’s the fast-paced antics of Superior Foes of Spider-Man or Hawkeye, or something more traditionally “punny” like Dan Slott’s Amazing Spider-Man or Silver Surfer. But even after all these years in the business, David maintains such a sharp, acerbic wit which allows his comics to be both joyful and appropriately dramatic at different intervals.

To repeat myself from my write-up of Spider-Man 2099 #1, I’m just so glad that Marvel green lit this project and David is back writing this series after nearly 20 years. I didn’t even know that I was necessarily looking for a rebooted 2099 series until that first comic came out last month. And now after reading Spider-Man 2099 #2 last week, I can safely say that this is currently the series I’m most looking forward to each month – at least until I see exactly where Slott is going with “Spider-Verse.” 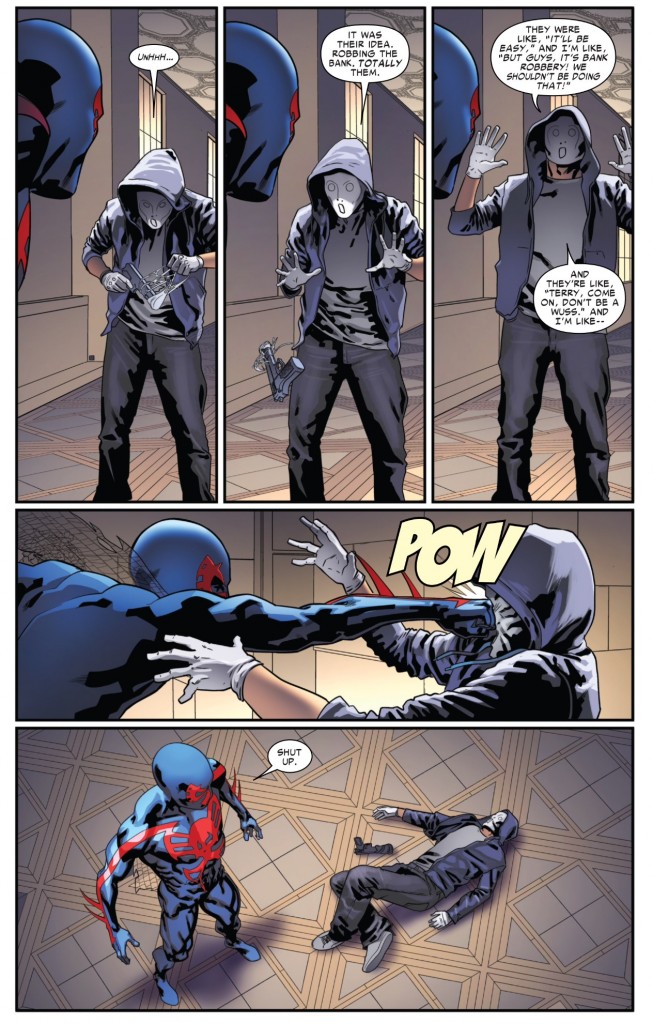 What makes Spider-Man 2099 #2 such a great story to read is how David maintains the allusion that there’s a lot of activity going on by firing fast and furious with the jokes – whether it’s a bank robber rambling about how he was peer pressured into committing a crime, or Miguel being confronted by Liz Allan about being Spider-Man and imagining him throwing her out the window (similar to the kind of cutaway antics you’d find in a show like 30 Rock) – and yet when you think back about what happened in the issue, it really was just a couple of conversations and a few scenes of Miguel being Spider-Man 2099.

But there’s nothing wrong with that, because David is just so good at writing character interactions that he can use these slower moments to really drive the story. At this stage of the 2099 process, David’s chief responsibility is establish the premise of this story and to then build it out by developing characters and determining where the drama or conflict is going to come from. 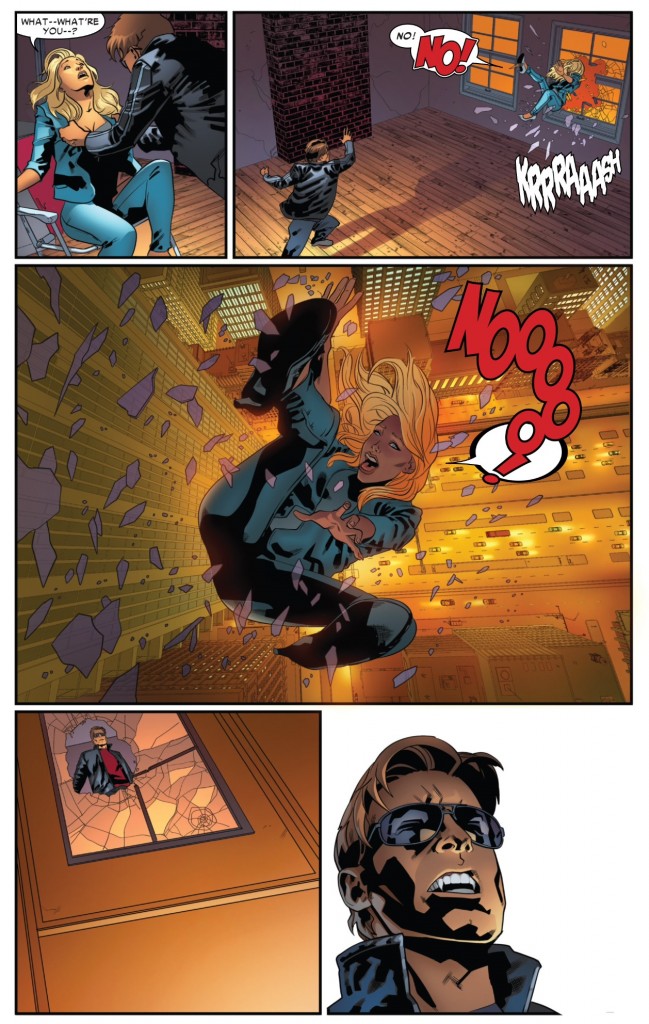 I’m sure once it was confirmed that this book was to take place in the modern era, and not in the future, everyone figured that at its core, 2099 would be a “fish out of water” story, but David has even figured out how to turn that concept on its ear. Whereas most fish out of water stories tend to have a protagonist who knows he’s “not in Kansas anymore,” but is also not aware enough to quickly adapt to his new surroundings and customs, David satirizes this trope by having Miguel bluntly opine that he just talks matter-of-factly about how he’s from the future and because he sounds so strange and bizarre, people just assume he’s making a joke.

David also does a masterful job of working around the same old tired tropes and ideas that pop up frequently in superhero comics in terms of sources of tension and conflict, and instead chooses to build drama in his own unique way.

Take for example how 2099 #1 ends with Liz vowing to figure out who this new Spider-Man might be and what his connection might be to her new employee “Mike.” Typically, a setup like this would lead to a multi-issue arc of Liz sleuthing around and Miguel having to hide his secret identity or risk blowing his cover. But instead, 2099 #2 just goes right for the jugular when Liz confronts Miguel and Miguel in turn offers her a half-truth about being from the future (and having the ability to holographically change clothes) that manages to protect his identity as Spider-Man. So now that we got that “mystery” out of the way, 2099’s story can more easily address the shocking bit of romantic tension between Miguel and Liz, which could potentially lead to a more original story than just “Spider-Man has to hide his secret identity from his friends.” 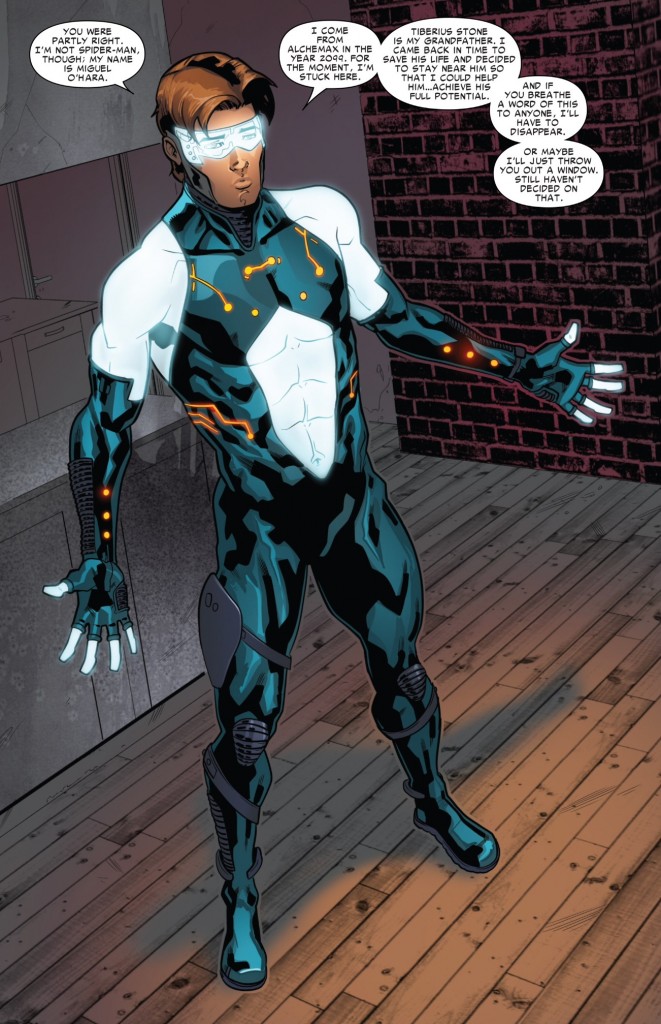 David applies the same storytelling technique to 2099’s most important “new” character, Tempest. While the sarcastic back and forth between she and Miguel lends itself to a bunch of stories that tease sexual tension between the characters, David ends 2099 #2 with an interesting reveal about Tempest’s health that is certain to drive the story in a completely unpredictable direction. Also keep in mind that readers of David’s run on the Incredible Hulk in the 80s and 90s will note that he does these stories about disease and healthy very, very well. 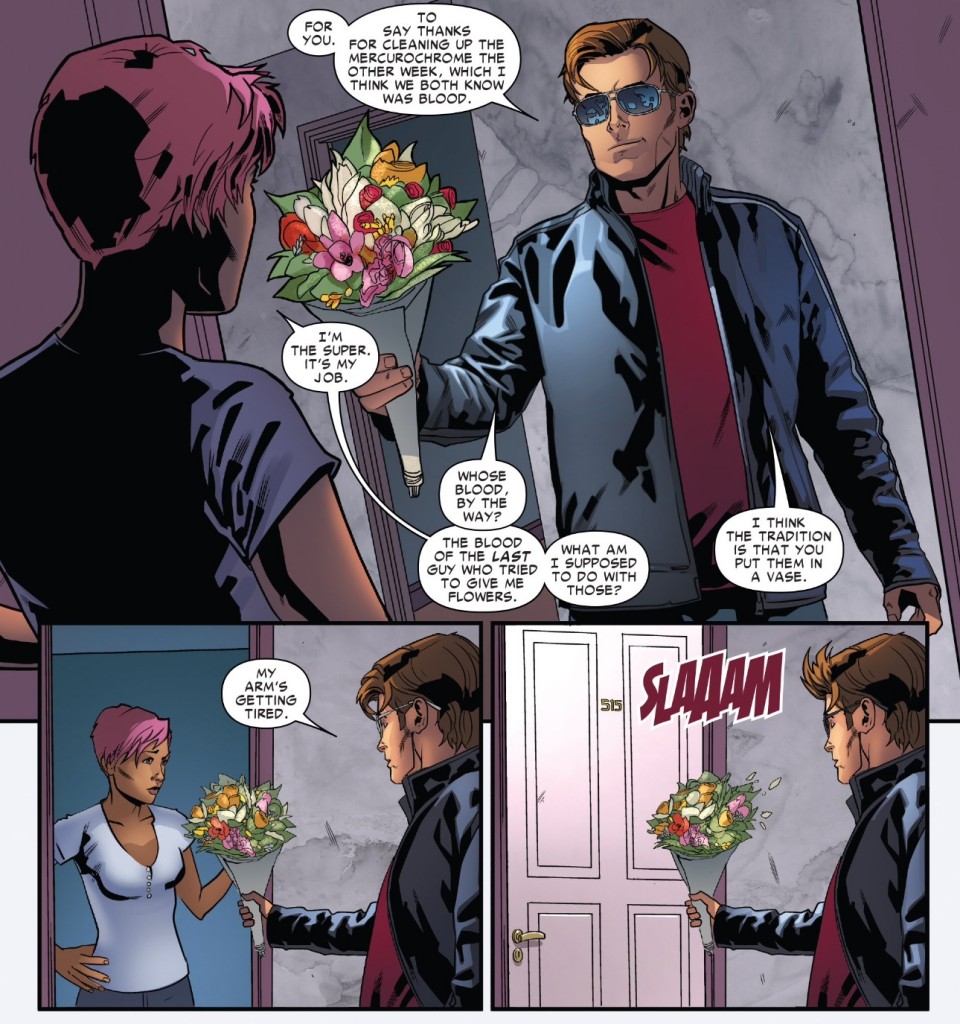 I imagine as 2099 chugs along, we are going to get considerably more scenes of Miguel in Spider-Man attire, doing Spider-Man-type things, but at this juncture, that’s not a huge concern of mine. The more compelling story to be told right now is how Miguel is adapting to his new surroundings and how he’s actions and “too cool for school” attitude have an effect on others. And that’s exactly where David’s focus appears to be.