The first 12 issues of Marvel Knights” Spider-Man is exactly why I wanted to start doing a recurring column on many of the Spidey “B” titles that I’ve neglected to write about since launching Chasing Amazing in 2011. Here we have a fairly famous and popular arc, with a superstar writer (Mark Millar), that introduced some new status quo changes (most notably, the Venom symbiote separating from Eddie Brock and ending up with Mac Gargan/Scorpion). I’m the first to admit, this is a pretty inexcusable blind spot for me. 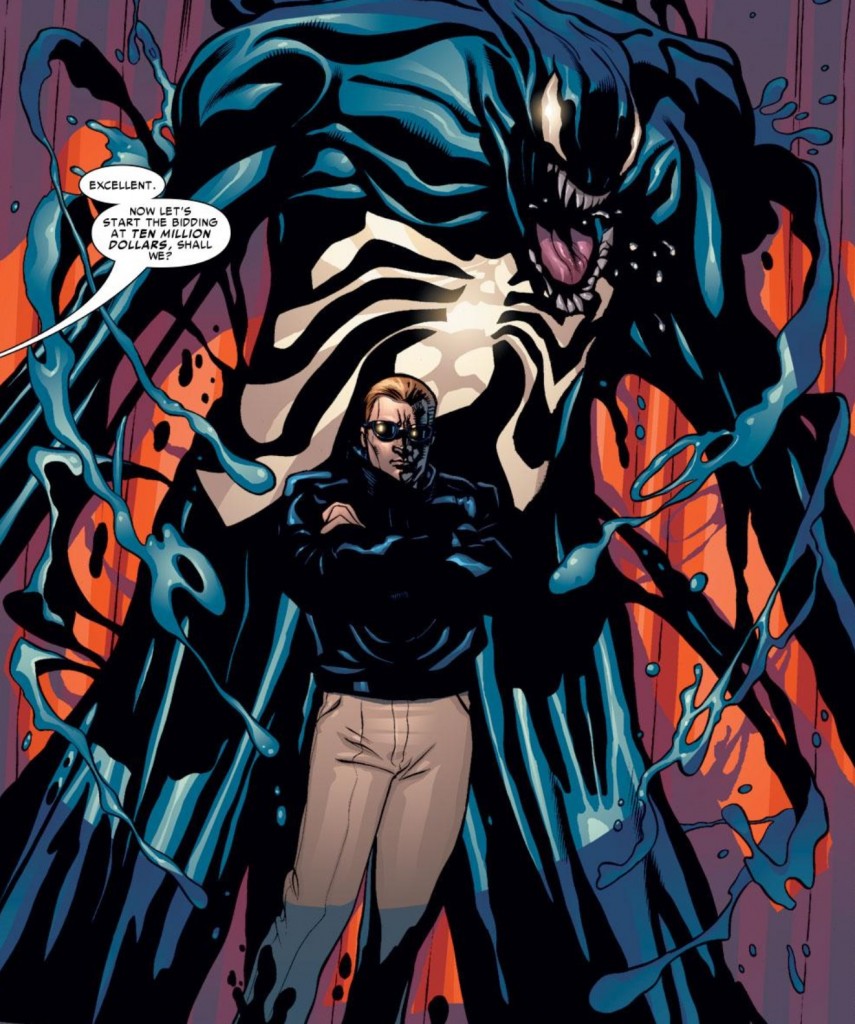 This run was first brought to my attention shortly after Chasing Amazing launched and a friend of mine e-mailed me to tell me that some of his favorite Spider-Man comics were the ones that Millar had written in the early/mid-2000s. Since I had long associated Millar with the Ultimate line of Marvel books, I had just assumed that this particular series was an off-shoot of Ultimate Spider-Man. After doing a little more digging around, I realized that MKS was in fact part of the 616 continuity I claimed to know and love so much.

In my defense, looking back, it was very easy for me to miss this series. I had only started subscribing to Amazing Spider-Man in 2004 and I was still taking a bit of a toe in the water approach to my comic book collection. After feeling myself get overwhelmed and disgusted with Spider-Man and the comic book industry in general in the 1990s, I wasn’t about to dive into too many series right away. Additionally, I had just started my first job out of college in 2003 – a job that saw me commute from Long Island to the Connecticut/New York state border every day, so my time was very limited to seek out comics that weren’t being delivered directly to my doorstep.

From there I had meant to pick up a collected edition of the arc – which to be accurate is three different storylines, “Down Among the Dead,” “Venomous” and “The Last Stand,” that are all connected by the common thread of Peter’s Aunt May being kidnapped by someone who knows his secret identity. When I saw Millar’s run placed on the Top 50 Spider-Man stories of all-time list compiled by the readers of the Comics Should Be Good blog last year, I knew that this blind spot had reached a critical juncture.

So, I FINALLY got to reading it, and what are my thoughts? Well, to be honest, I think it’s good … but not great.

What a cop-out, right? 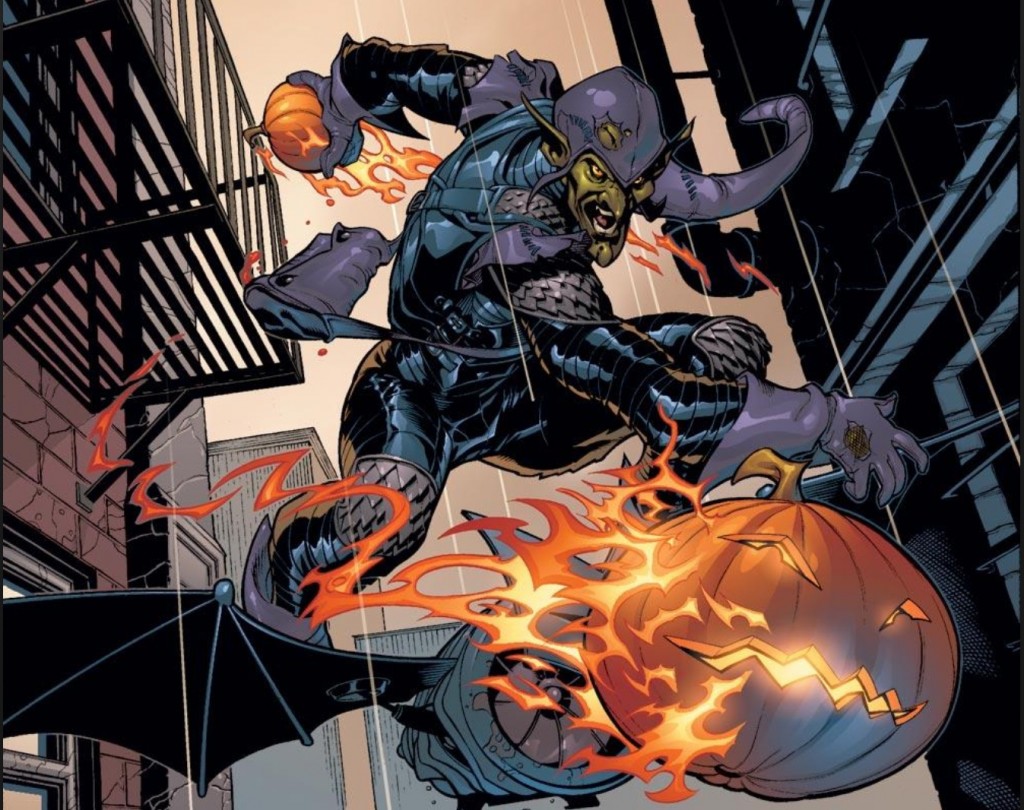 Here’s the thing, Millar crafts a very memorable story and Terry Dodson’s art is really quite good, but given everything they had to work with, it would have been a bigger disappointment if they didn’t deliver something worthwhile. Millar gets the keys to a brand-new Spider-Man title where he uses nearly every single one of Spider-Man’s greatest villains (Norman Osborn/Green Goblin, Doc Ock, Venom, Vulture, Electro, Lizard, Sandman and Scorpion to name a few), has 12 issues worth of storyline development and exposition for the major conflict (Aunt May’s disappearance), and even has the green light to call back to one of comic’s most famous moments ever (the death of Gwen Stacy). MKS is the comic book equivalent of a famous movie director getting unlimited funds, time and A-list actors to make a film and then congratulating him for a $100 million opening weekend (in other words, The Dark Knight Rises). The bigger deal would have been if MKS was a flop, not a success. 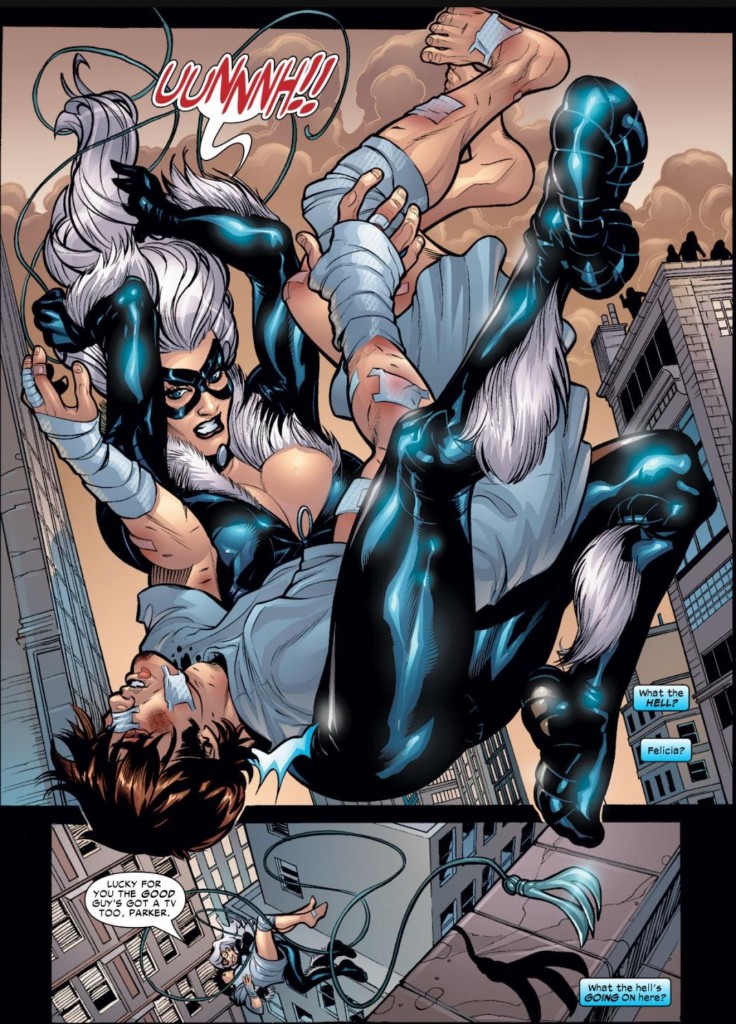 And that’s not to say there aren’t things about this storyline I didn’t genuinely like. In the ever-swinging pendulum of “who’s the greatest Spider-Man villain,” Millar seems firmly entrenched in the Osborn/Goblin camp, and as a result, we get some of the best interplay between Spidey and Norman I think we’ve ever seen in a Spider-Man comic. While we’ve seen Osborn torment Spider-Man a dozen different ways over the years, we very rarely see them talk to each other like rational human beings. The stuff where Peter first arrives at Norman’s cell to talk to him about Aunt May’s disappearance, has an eerie calm reminiscent of Hannibal Lecter and Clarice in Silence of the Lambs. 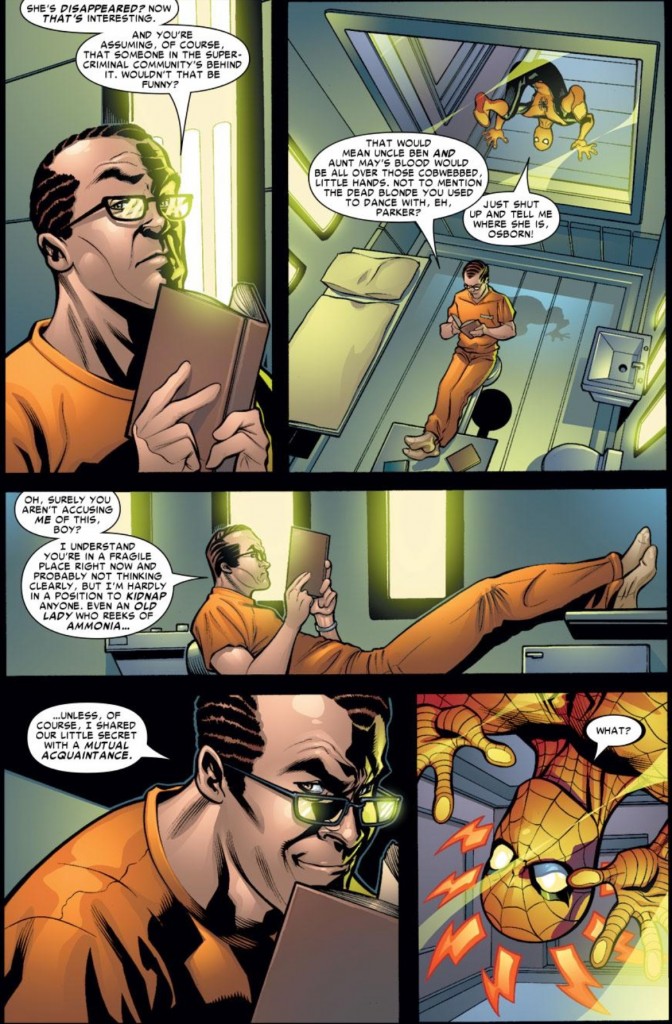 The Venom mini-arc is an interesting twist on the character and shows a natural progression for Eddie Brock, who has been so physically damaged by the symbiote, he has no choice but to auction it off to the highest evil bidder. The only problem is the suit finds its way into the hands of career B-lister Gargan, who may have been one of the least interesting choices Millar could have went with. Then again, Millar and Marvel were clearly trying to breathe new life into an otherwise listless Silver Age creation, so I got to give them some points for effort. 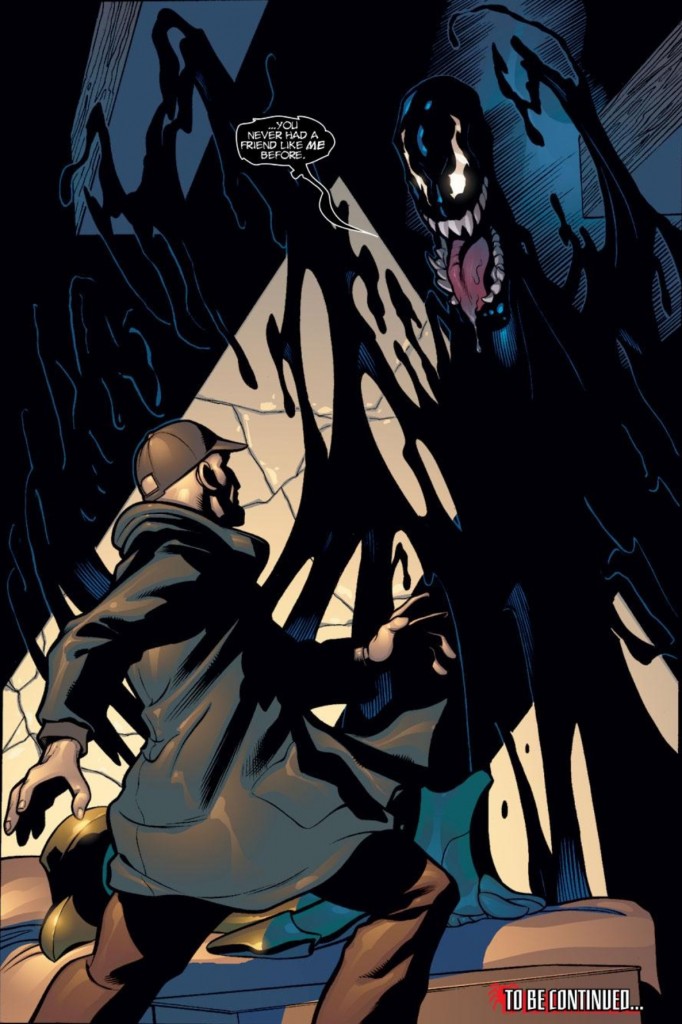 Millar even gets to play with top shelf Spider-Man supporting cast talent, using the Black Cat extensively throughout the arc, and even giving her a great moment where she saves Spider-Man from being dropped to his death by the Vulture. The Cat is always a welcome addition to a Spider-Man comic, though I’ve always preferred the pairing of her and Spider-Man when there’s real sexual tension between them. In the MKS #12, this tension is acknowledged, but mostly as unrequited love from Felicia to Peter (who’s very clearly in love with Mary Jane and happily married), and not until the very end of the storyline. 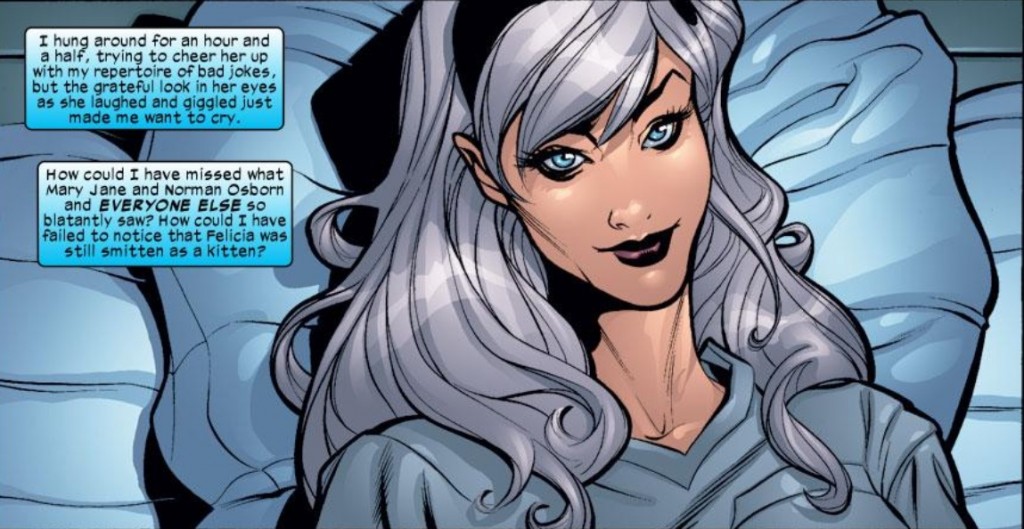 While the “I need money for a sick family member” motivation for a villain is a bit of a cliché, I really do appreciate the new backstory Millar hands to the Vulture in this series – a character that has been so critically under-used in the modern age of comics (unless you’re Roger Stern) that I’m saddened by the fact that there are so many newer Spider-Man fans out there who will never truly appreciate his history and role in Spidey’s rogues gallery. Even when he is fully-powered, there is always something a little oft-putting about seeing Spider-Man battle a geriatric. Millar creates well-earned sympathy for Vulture with this “C” story in the arc. Especially when Spidey himself is kicking himself for not being more understanding to the villain’s personal struggle. 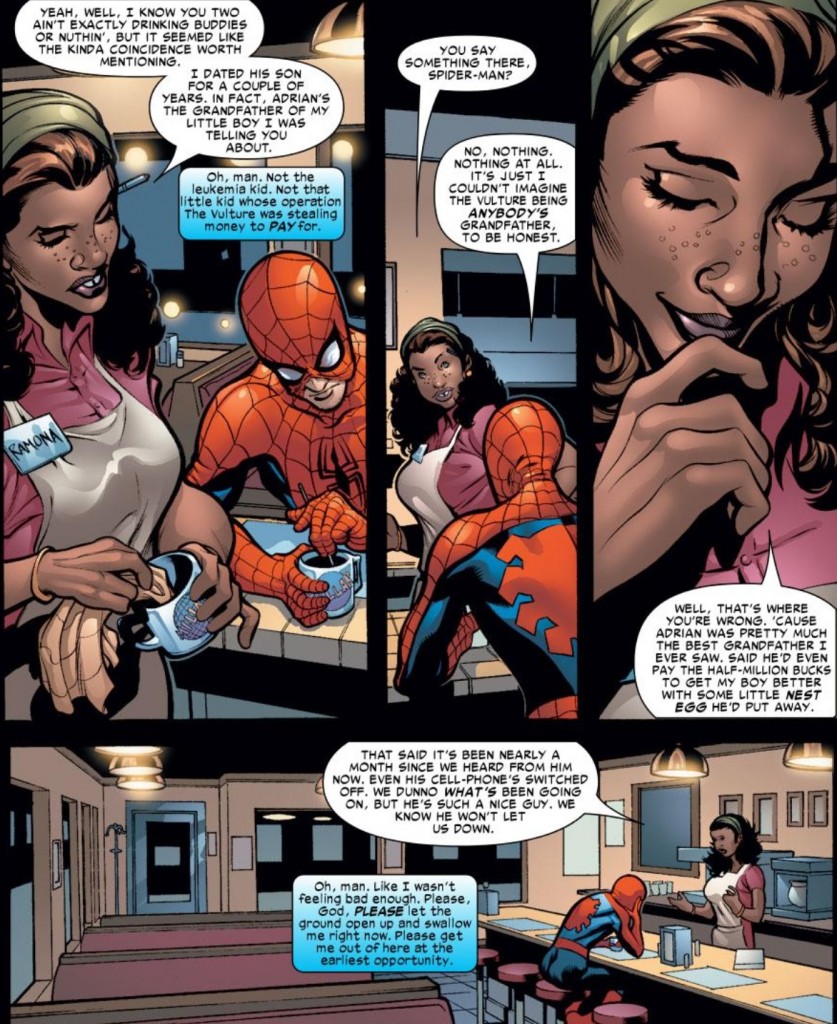 But where there are positives, there are also a number of negatives, even beyond some of the nitpicky things I mentioned earlier. Osborn’s creation of the “Sinister Twelve” really smacks of a “these go to 11” moment for me. Millar is already juggling Osborn, Vulture, Electro, Venom and Scorpion in this arc, so watching him then introduce a supervillain stable with nearly half of the participants not even all that super (Boomerang? Tombstone?) is excessive.

On a similar note, in MKS’s final chapter, Peter gets to relive his second greatest failure in life (after the death of Uncle Ben) when Mary Jane is thrown off the George Washington Bridge by Osborn (who also answers a long-standing continuity issue from Amazing Spider-Man #121 about which bridge Gwen was tossed from, Brooklyn or GW. Osborn says here that he has a different bridge). The scenario would have been more emotionally powerful if JM DeMatteis didn’t do the same thing with Harry Osborn’s Goblin and MJ in Spectacular Spider-Man #200. In that story, the Gwen Stacy reprise tells a better story, where in MKS, it just comes across as yet another obstacle for Peter/Spider-Man to deal with. I’m all for turning the screws of conflict as much as you can, but I just feel like Millar piles on much more than necessary in the series’ third act. 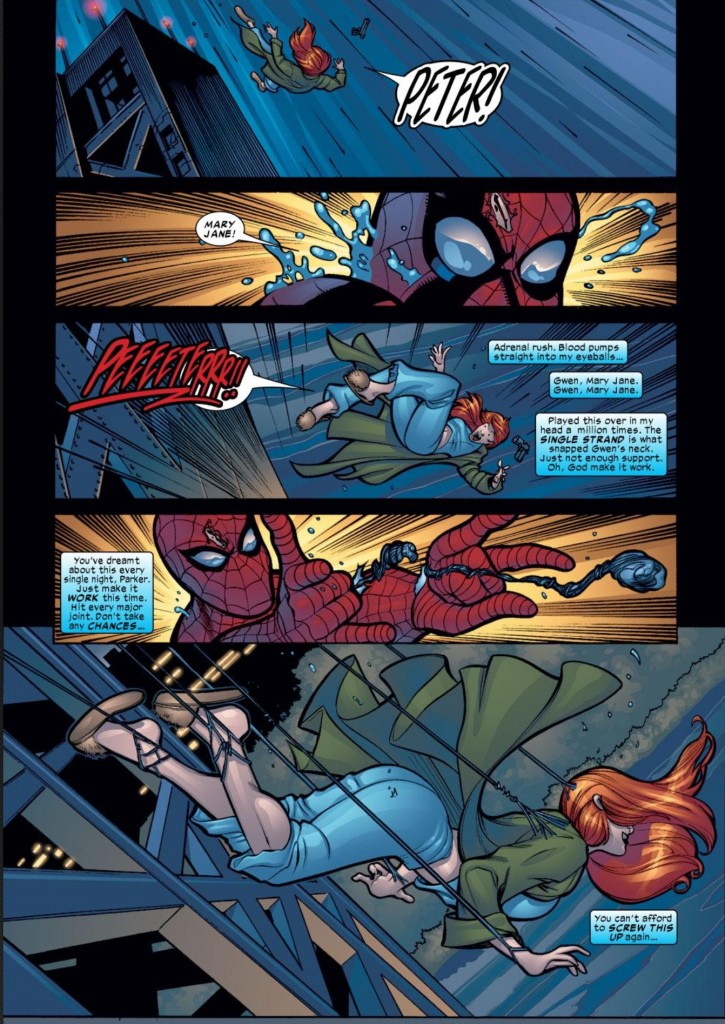 Overall, I just had a hard time fully embracing the tone of Millar’s run. Given that this is his first full run on a Spider-Man 616 title, I can’t move past the idea that there’s some level of unfamiliarity from him. Maybe it’s all in my head, but the series is just filled with little details in the dialogue and action that feel “off”.” I think MKS is a great case study in what happens when you marry a star writer with an iconic brand like Spider-Man. The same could probably be said about some of Grant Morrison’s work on Superman and Batman. It’s not that Millar isn’t true to the character, as much as it’s very clear he’s still trying to put his own unique spin on Spider-Man. Millar’s Spidey is angrier and seemingly less reflective. His interaction with The Avengers in MKS #2 is really out-of-whack and confrontational (literally). He takes pleasure in his high school bullies ogling at his wife. I know that Millar is trying to paint Spider-Man with more “serious” brushstrokes per the MK brand, which I’m normally more of a fan of than the “he’s the court jester” approach, but MKS just veers in a direction that I’m not always comfortable with.

Still, Millar’s work on MKS is enjoyable. I just think the flaws I pointed out, in addition to just my own instincts about the series, prevents it from joining my personal top “pantheon” of arcs. In MKS, Millar has laid a physical minefield for Peter to contend with, filled with past and present villains and unlikely villains. But I can’t say the arc tells me much about Peter himself.  I tend to naturally gravitate to stories that look more at Spider-Man/Peter the human being, and how his personal demons tend to serve as obstacles all on their own, often making the combined might of his adversaries almost superfluous to the central conflict.