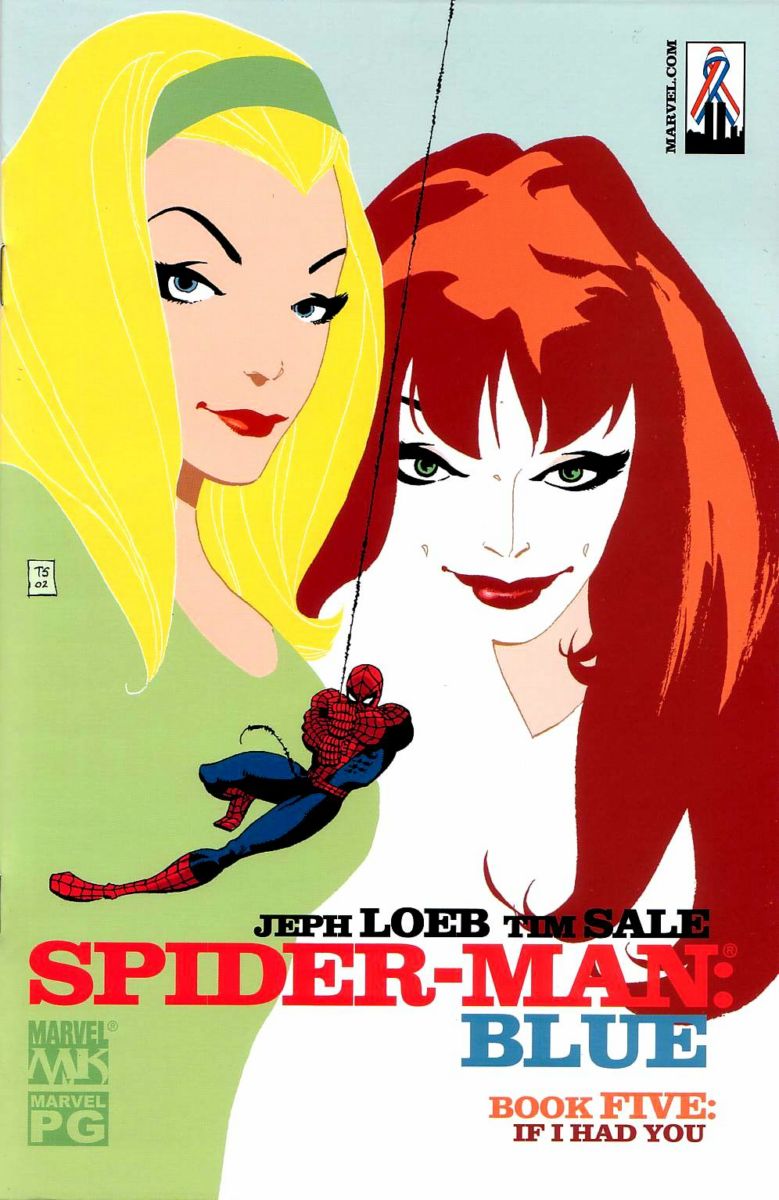 Spider-Man has long been perceived as a superhero comic book, but at its core, it’s also a love story. More so than any other comic book I can think of, there has always been an emphasis on romantic and familial relationships in Spider-Man – i.e. love – whether it’s Peter Parker with Mary Jane or Gwen Stacy, or even Aunt May and Uncle Ben and how their love for each other and their nephew was a critical component of the superhero’s moral foundation. Let’s also not forget how the tragic loss of these loves went on to shape our hero’s perception of the world.

Spider-Man: Blue understands the power of love in Peter’s life better than any Spidey story out there. It’s heart breaking and delicate; funny and inspiring; whimsical and profound. Jeph Loeb’s script – which is essentially adapted from existing source material – is a triumph and Tim Sale’s artwork is gorgeous. After re-reading it recently in anticipation of Valentine’s Day, it made me reconsider the arbitrary rules I established during my own countdown of favorite issues of Amazing Spider-Man last month. Spider-Man: Blue might honestly be my favorite Spider-Man story of all. It should have been on my list. Who cares that it didn’t technically appear in the pages of Amazing Spider-Man. 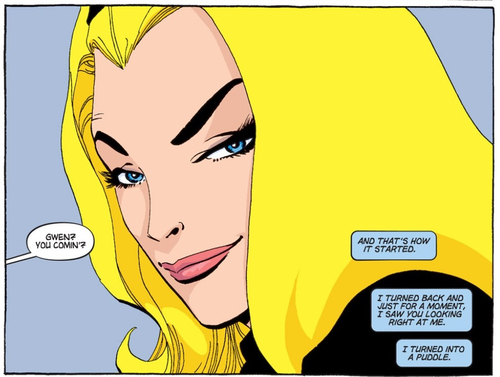 Despite my criticism of Gwen as somewhat “boring” in a post about Mary Jane and Superior Spider-Man #2 earlier this week, I wasn’t really talking about the Gwen Stacy who appears in  Blue, or even the Gwen in her “prime” run on Amazing Spider-Man.

In a post I made around this time last year, I talked about how the initial execution of the Peter and Gwen romance in the pages of ASM felt a little forced and out of nowhere. Once the romance was in its groove, it was fantastic, but I’ve never been able to point to a definitive turning point moment where the relationship went from mild flirtations to full-blown love. Spider-Man: Blue fills in those blanks. While some if it is revisionist history, it’s the good kind of retcon. It provides real clarity to past events in a way that doesn’t tread all over its legacy.

This miniseries is unashamed about the fact that Gwen was Peter’s one true love. The impact she had on his life was so profound and far-reaching, that he was never the same after they first got together, and certainly not after she was tragically killed by the Green Goblin. This is not to say he pined for Gwen romantically after she died – especially not when he was with Mary Jane. This idea is dealt with quite adeptly when MJ is there at the very end of  Blue, listening in on Peter as he pours his soul into a tape recorder about Gwen. MJ is fully cognizant of the influence this other woman has had on her husband’s life. How, without the sincere affection and care Gwen showed Peter when they first kissed on that Valentine’s Day, Peter may have never developed the capacity to truly love someone romantically. And without Gwen’s death, MJ may have never been able to look at her own life in a meaningful way that would have allowed her to embrace Peter and teach him how to love again (or love herself enough to settle down with Peter). 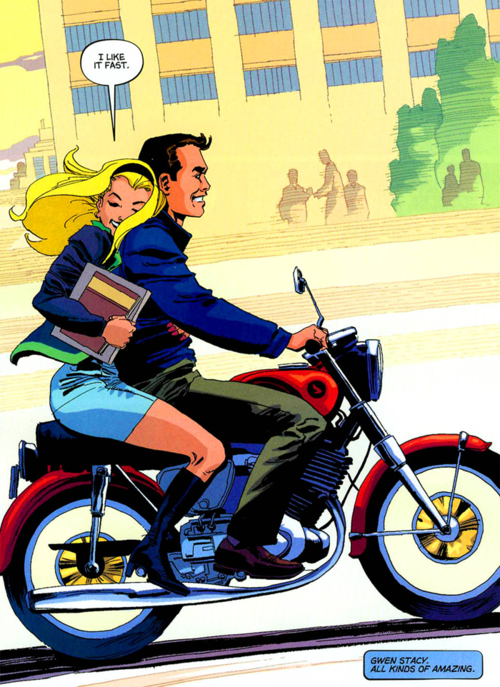 And that still undersells the power of Gwen Stacy. There’s a reason her death is considered such a watershed moment in not only Spider-Man history, but in all of comic books. Her death wasn’t just a shocking development carried out by an editorial department looking for a bump in sales (though an argument can be made that Marvel’s creative team was running out of legitimate storylines to explore with Peter and Gwen if they were so insistent on not marrying the two together). Gwen’s death marked a true loss of innocence in Spider-Man’s history. Gwen was absolutely pure. Her only true “flaw” was more of a plot device and contrivance than anything else – she didn’t trust Spider-Man, especially not after the death of her father. When a superhero is killed or badly injured in battle with a villain, it’s justifiable because it’s understood that the risk is part of the job description. But to watch an innocent get murdered basically because the wrong person was madly in love with her is gut-wrenching to think about.

I always had an odd sort of connection to Gwen. I first read about her in elementary school when I picked up an issue of the Handbook to the Marvel Universe series at the local candy/cigarette store near my childhood home. The issue focused solely on the deceased members of the Marvel universe. I was primarily interested in the comic because the Red Skull, someone I had recognized from the Captain America VHS tapes my dad had brought home for me as a little kid, was on the cover. But as I read through it, I was introduced to a world of heroes who had long been erased from Marvel continuity before I had picked up my first ever comic book. Most of them died in battle with super powered heroes or villains. And then there was Gwen Stacy.

I was saddened by the biography of this young woman who had dated Peter Parker years before he ended up with who I understood to be his current “woman” in Mary Jane.  I had wondered to myself if there was still a chance that she and Peter would somehow get back together – that someone in Marvel’s Editorial Department would bring her back for real (not a clone) and set things right. It seemed unfair to me that she should be dead. It’s a comic book, who’s going to police something like that? It’s not like death is permanent in fiction.

Early on in my collecting years, the Death of Gwen Stacy, ASM #121, became a bit of an obsession for me. It was right up there in cultural significance with ASM #300. When I found a local comic book shop that had an affordable copy, I had to find a way to own it.

As time when on, I would always find myself getting excited when there was some kind of incarnation of Gwen. I bought two copies of ASM #399 because the Gwen clone had returned. I loved reading the old back issues, especially ASM #181, which retold the origin, and the Peter/MJ wedding annual, because there would always be a call back to Gwen in those stories. Why should I move on from this character if the protagonist of my favorite comic book series had no interest in moving on? I was even able to temporarily look past J. Michael Straczinski’s “Sin’s Past” story line in the mid-2000s, because it was centered around Gwen. Of course when I read it and realized that JMS and Marvel were sullying Gwen’s name by having her carry the demon spawn of Norman Osborn, I realized even I had some limits when it came to my affection for this character.

I’ll admit it – perhaps I’m guilty of a little vicarious living here when it comes to Peter and Gwen. Not that I am actually in love with a fictitious illustrated woman. Rather the idea that a wallflower turned secret superhero like Peter was able to find requited love from a woman as well-rounded as Gwen – beautiful, intelligent, funny, contemporary, good family life, etc. As someone who definitely fit into the pre-radioactive spider bite Parker mold of junior high/high school students than the Flash Thompson mold, Peter and Gwen gave me hope. That there was light at the end of the tunnel. That life can be good sometimes. 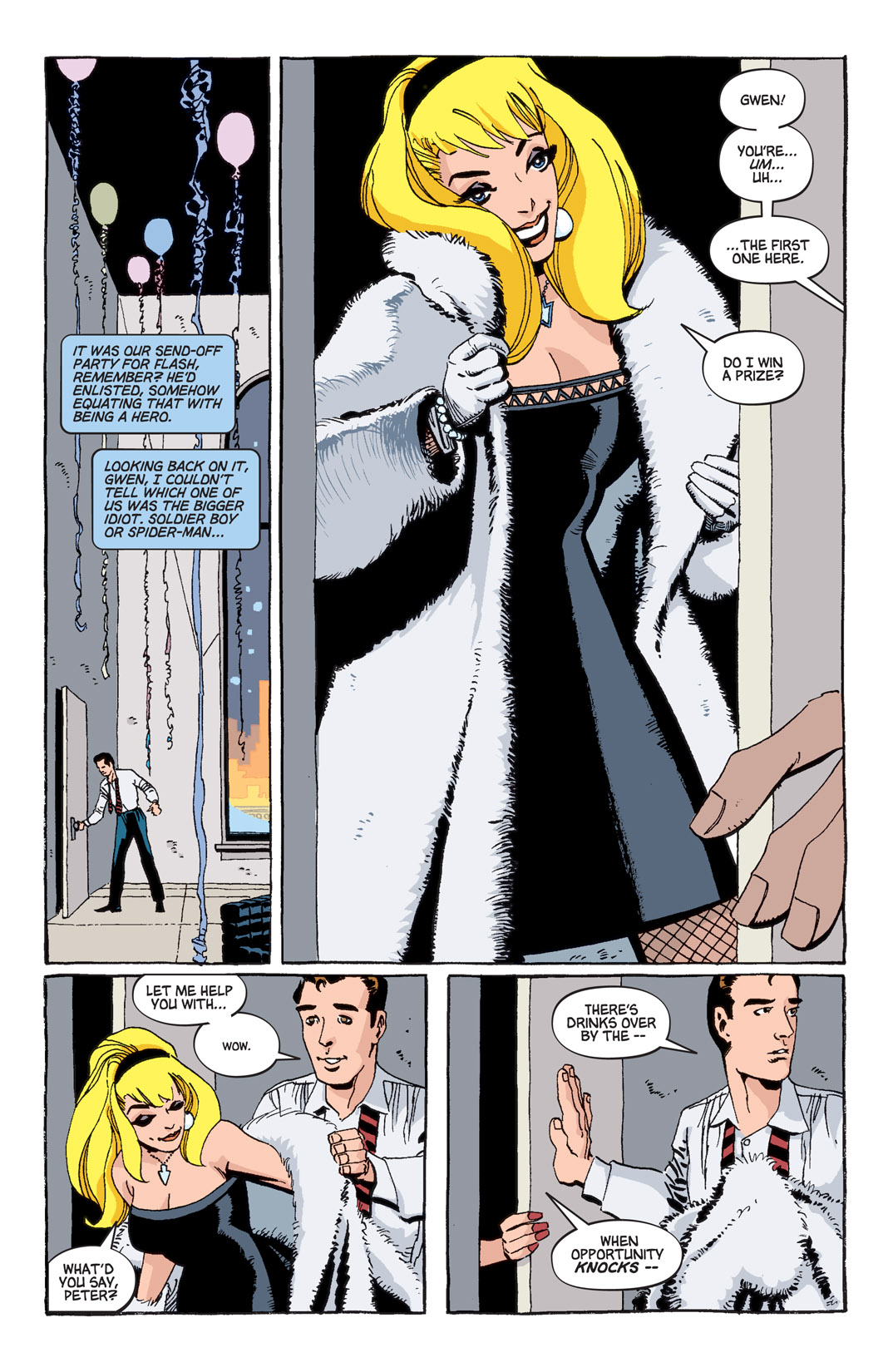 Fortunately, in real life, I found my Gwen Stacy. Actually, she’s more like a combination of Gwen and MJ. And I’m okay with that. But there were times in my life where I wasn’t always certain that I was capable of finding love like that. I questioned if I even deserved to find love like that. I worried that if I did luck out and find it, if I would be capable of holding onto it and not screwing it up. Like Peter, I used to (and still do to some extent) get caught up in my own head, making me completely unaware of basic social cues and situations. I needed a woman who would balance delicateness and persistence in making me realize she wanted to love me and be loved in return the way Gwen did with Peter in Blue. And there’s not a single day that goes by where I’m not eternally grateful for finding that woman in my own life. Just as I’m sure Peter will remain grateful for Gwen, despite the fact that she was tragically pulled away from him.

What makes me love Blue so much is that it understands that the Gwen Stacy/Peter love story will always remain the great unresolved arc in Spider-Man’s history. Without completely damning the character’s history (which I guess is never out of the question in today’s world of comic books), we will never really know what would have actually happened with Peter and Gwen if the Goblin hadn’t murdered her. Would Peter have still ended up with MJ? Would he have quit being Spider-Man altogether in order to pursue the white picket house with Miss Stacy? We’ll never know. So instead, we all just linger in that kiss shared between Peter and Gwen on that Valentine’s Day night where she gave him a heart-shaped card with a smiley face on it. We linger on that and smile at a love so transcendent, you almost doubt its plausibility, until you find something of that nature for yourself.