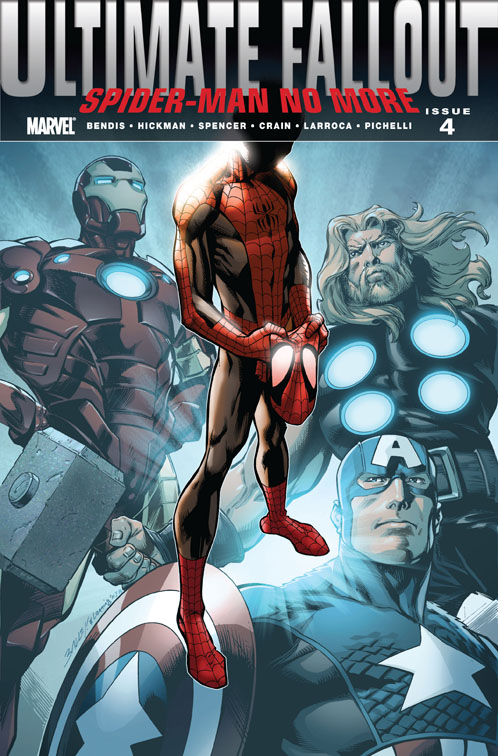 With the six-part Ultimate Fallout: Spider-Man No More series recently wrapped, I’ve been reminded why I’ve never been much of a fan of Marvel’s “Ultimate” universe. I guess it all comes down to a matter of taste. I’ve always been more of a traditionalist when it comes to my pop culture. While Ultimate Spider-Man and its primary writer, Brian Michael Bendis, have earned raves from many comic book fans – especially when the Ultimate universe was first introduced in the early 2000s – I never quite saw the purpose behind such a hard reboot that entirely new “alternative” universe needed to be introduced.

Sure, it allows the writers to take characters on new and different journeys, but the way most creative teams change the status quo every couple of years with deaths, resurrections, etc., the Ultimate line still seems superfluous to me. Heck, in the more “traditional” Amazing Spider-Man universe, Marvel got tired a few years back of Peter Parker being married and then “poof,” his marriage to Mary Jane was literally annulled by the devil. It’s a comic book. It’s not like there are legitimate “rules” that need to be followed here.

I was initially skeptical about the whole Ultimate “death of Spider-Man” storyline because I couldn’t envision what Bendis’ endgame was going to be. While I found the actual USM storyline, and issue #160 in particular, to be entertaining reads, I had low expectations for Marvel’s aftermath series, Ultimate Fallout. I gave this miniseries a chance, but my mind remains unchanged.

What I discovered in these six comics, is, from what I gather, a common trick of Bendis’ and his co-writer, Jonathan Hickman: introduce a really broad, earthshaking idea into a story but then work at such a glacial place that nothing of note ever actually happens. My interest was piqued in the series’ first three parts because the writers dove right into the funeral of Peter Parker and the appropriate aftermath – Aunt May’s distress, Mary Jane looking for a scapegoat, and other heroes around the Ultimate Marvel universe coping with the loss of one of their own.  And then the miniseries pretty much meanders from there and serves as one overblown (and expensive) commercial for a number of relaunches which will be released in September.  Seriously, at $3.99 a pop and six comic books, I expect more of a payoff from this series than for Mary Jane to hold a vendetta against the superhero universe and to be convinced not to “expose” what “really” happened in Peter’s death after just a two-page encounter with Nick Fury. How is it possible that there were six comics worth of storyline to build to that moment and it still reads like it was attached with a rivet gun by the creative team.

Obviously, the most important development to come out of this miniseries is the birth of a “new” Spider-Man. The introduction of Miles Morales, an interracial Spider-Man, gained a ton of media attention earlier this month, and as a result, Ultimate Fallout #4 was a tricky issue to track down. But even after reading it, I felt pretty non-plussed by the reveal.

It’s not that I’m some sort of fanatical “Peter Parker must live forever” guy – if Marvel ever felt the “need” to kill of Peter Parker, even in the Amazing universe, I would be really annoyed and aggravated, but I would at least wait and see what they were actually going to do with the aftermath. But the problem with what Marvel did here with Ultimate universe is rather than let the dust settle on a world without Spider-Man, Bendis and Hickman dive headfirst and introduce a brand new Spider-Man who we know absolutely nothing about, except for the fact that he’s bi-racial – which again, sounds good in concept, but what is Marvel actually going to DO with the fact that their most famous superhero has been reborn as a part-Latino, part-African American teenager? Is Miles going to have to cope with a world were there’s still some serious racial inequality and then disappear behind a mask to do something about it? Whereas Peter was always driven by the death of his Uncle Ben to do good, what is going to motivate Miles? We didn’t learn an iota about Miles in the Ultimate Fallout miniseries. All we know is that after an encounter with the villain, the Kangaroo, he is reconsidering wearing the same costume as Peter Parker because it might be in “bad taste.”

And while I understand that Marvel has the new Ultimate Spider-Man reboot to start developing Miles’ backstory, they accomplished nothing to make me interested about this new Spider-Man. We know two things right now: there’s a new Spider-Man and he’s not a token white kid like Peter. You got to treat your audience with a little more respect than that. Creating a media storm about your new character’s race and then not doing anything to develop him in the comic book series where he’s introduced is the equivalent of dismissively telling your readers, “hey, just buy this because we said so.”

And why does there even need to be a NEW Spider-Man so soon? Why couldn’t Miles Morales be introduced as someone who wants to avenge the death of Peter Parker by being some new masked hero? Something completely different than a teenager with spider attributes. If you’re going to kill your most popular character, make it count. Don’t change the color of his costume and the skin of the person under the mask and press play.  Where’s the “fallout” that this miniseries promised? It just feels like Marvel is putting a really great Led Zeppelin cover band out on stage and telling people that they’re just as good, so you should still pay money to see them. But it’s not Led Zeppelin. If these guys are such great musicians, why can’t they just make their own music?

So, thus ends my latest mild flirtation with the Ultimate storyline. Marvel had a handful of issues to try and get me hooked again, and I’ve been left exasperated. It’s not that these are terrible comic books – not by any stretch. But Marvel continually fails to give a tired old traditionalist like me a reason to want to go out and read these comics every month.  If the sole premise of unveiling this Ultimate universe some years back was to create a brand new world of new storytelling, then be daring and definitive about it. The aftermath of Peter Parker’s death was neither.