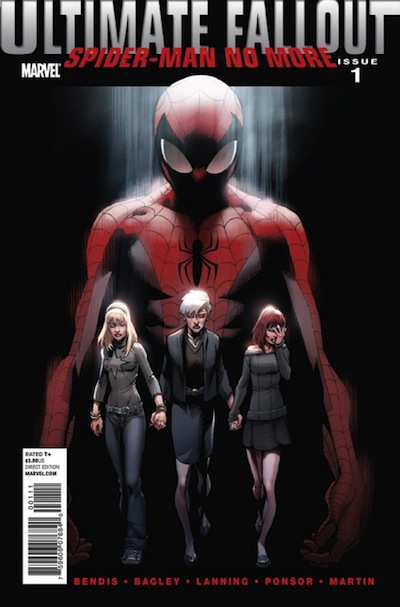 Peter Parker/Spider-Man has been a staple in the Marvel superhero universe for nearly 50 years. During this time, numerous heroes and villains have been introduced, killed off, retired, married, etc. But there’s never been a world without Peter Parker as Spider-Man.

In the six-part miniseries Ultimate Fallout:Spider-Man No More, Marvel is now giving us a world without Peter Parker/Spider-Man. After the death of Spider-Man in the “Ultimate” Marvel universe – best described as an alternate universe from the “Amazing” Spider-Man world I usually write about – Marvel is exploring the cause and affect of this traumatic event.

While I’ve never been much of a fan, follower or collector of the Ultimate Spider-Man series, I found it difficult to ignore the “Death of Spider-Man” storyline, just because I wanted to see if Marvel had the guts to actually kill off its most popular character, and if the creative team would go about doing it in an effective way. By the end of the death issue, I was actually impressed with writer Brian Michael Bendis’ approach, but wanted to reserve final, FINAL judgment until I read how Bendis and Co. were going to treat the fallout from the death of Spider-Man.

Through Fallout’s first three issues, what I’ve appreciated the most is how far-reaching the impact of Peter’s death is being portrayed. While the cover of Fallout’s first issue shows the three living people who were the closest to Peter – Aunt May, Mary Jane and Gwen Stacy – the series is working hard to demonstrate that there is more to Spider-Man’s death, and in the world of superheroes, nothing happens in vacuum. Peter/Spider-Man’s funeral is being promoted as the biggest in New York City history with family, friends, other superheroes and even adversaries like Daily Bugle editor J. Jonah Jameson in attendance. Meanwhile, during the funeral proceedings, Steve Rogers/Captain America faults himself, Tony Stark/Iron Man is meditative and thinking about a recent encounter with an entrepreneur who is trying to convince to give up no being a hero, and Marvel’s other “younger” heroes like Johnny Storm/Human Torch, and X-Men Kitty Pryde and Rogue are in mourning. Mary Jane meanwhile is trying to prove that Peter’s death is on the hands of super-spy Nick Fury.

What is seemingly being set-up is a full-fledged refresh of the Ultimate universe. And this makes sense to me. Peter/Spider-Man has had such a profound affect on this universe. Going beyond just his regular acts of heroism, the fact that Peter was tasked with using his great power while operating in secret under a mask has likely made his death even more unnerving to the universe’s other heroes. Thor, Captain America, the Fantastic Four, etc. are all able to function as heroes with their actual identities out in the open. The secret identity of Spider-Man has made him a more surreal, almost mythological character. His death transforms the myth into a hardened reality that’s difficult to accept.

The one thing missing in the first half of the Fallout series is more of a look at Spider-Man’s villains. Marvel has scratched the surface of how the superhero faction is coping with Spidey’s death, but I would expect the criminal and villainous element would be reacting strongly as well.  Are they celebrating Spider-Man’s defeat? Will anyone target Aunt May or Mary Jane in an act of retribution now that they know Spider-Man’s secret identity? Do any of them have a sense of loss with the news of Spidey’s death? On that last note, keep in mind that well-rounded heroes and villains are practically symbiotic and have a difficult time functioning in their proper roles without each other. Since it sounds like the second half of this mini-series will focus on the introduction of a new Spider-Man wearing the mask, I would hate to see Marvel bypass an opportunity to explore adding new depth to a few of Ultimate Spider-Man’s strongest (and still living) villains.