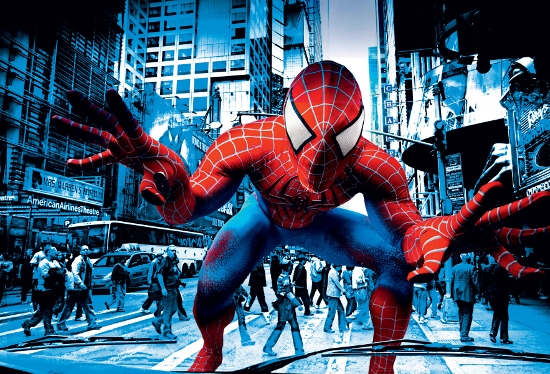 No, you didn’t just inadvertently wander onto the home page for playbill.com. But since the Spider-Man musical, “Spider-Man: Turn off the Dark” is making its long-awaited (and stalled) debut tonight on Broadway, and Chasing Amazing at the core is a site about one man’s meditation on Spider-Man comic books, I thought I would occupy a little internet real estate to connect the two.

Besides, I actual am a bit of an authority to talk about musical theater. I did a little amateur (very amateurish) acting when I was younger, and my wife is actually a very talented actress and musician who has performed at venues throughout New York City, so the trials of tribulations of Spider-Man: Turn off the Dark – which featured constant delays, an escalating budget, a coup that removed the director and numerous injuries (some pretty serious) to actors in the show – have hit a little close to home for us on multiple levels.

For starters, I haven’t seen either version of this show:  the original incarnation which seemingly had nothing to do with the Spider-Man comic books and was directed and conceptualized by Julie Taymor, who hopefully will never get another job on Broadway again; nor the recently rewritten version which has more of a comic book sensibility to it (for example *spoiler alert* Spider-Man’s arch villain Green Goblin actually lives into the second act and the wacky Arachna villain, a mortal transformed into a spider by the goddess Athena and probably exhibit A of Taymor’s self-satisfying egomania, is no longer the main adversary for Spider-Man). At this point, I plan to never see this show because of the amount of bad karma generated by the show’s original creators and producers. As far as I’m concerned, I hope this show fails and becomes the biggest flop in Broadway history, where it rightly belongs.

And I feel this strongly, despite some good people at Marvel obviously rooting for this thing to succeed. For people like current Amazing Spider-Man writer Dan Slott, who recently tweeted that this train wreck of a musical will hopefully “prove everyone wrong,” I hope they understand why so many people out there who care about both Spider-Man and theater as art-forms are rooting against the show’s success.

Spider-Man, the character, has long been an advocate for the vulnerable, protecting innocents against those who are bent on death and destruction. Yet in a show about Spider-Man, we’ve seen hungry young actors who are probably thrilled to get any kind of a gig in this brutal economy, get seriously injured on-stage because of a poorly conceptualized, safety-be-damned attitude that was more representative of circus stunt-show. And despite these injuries, the show “went on” a few more months before somebody finally woke up and realized that Turn of the Dark was dangerous not only for the actors, but potentially the audience as well. But hey, the damn thing cost $75 million and people were still going to see it, making the producers some of that money back.

And that brings me to the audience. Confession time. I actually was initially interested in getting tickets to see this show. A good mutual friend of my wife and mine has long been obsessed with some of the worst musicals in Broadway history – even making a push to restage a musical version of Stephen King’s Carrie (yes, this musical played on Broadway for about week in the 1980s). So, yes, in a way, I’m as bad as the people I’m about to admonish, though I only admit that I wanted to see this show just because I thought the storyline was ridiculous, the acting would be terrible and the music, by Bono and The Edge, would sound more like a U2 concert that a Broadway show. Instead, people filled the theater every night to see far worse (per the original NY Times review in February):

Calamity struck, and it was a real-life (albeit small) calamity — not some tedious, confusing tripe involving a pretty girl dangling from a skyscraper and supervillains laying siege to Manhattan. And not the more general and seriously depressing disaster that was the sum of the mismatched parts that had been assembled onstage.

No, an honest-to-gosh, show-stopping glitch occurred, just as the title character of this new musical was about to vanquish or be vanquished by the evil Green Goblin. Never fully explained “mechanical difficulties” were announced by an amplified voice (not immediately distinguishable from the other amplified voices we had been hearing for what felt like forever), as the actors in the scene deflated before our eyes. And for the first time that night something like genuine pleasure spread through the house.

That glee soon took the form of spontaneous, nigh-ecstatic applause, a sound unheard in the previous hour. After vamping on a green fake piano (don’t ask), Patrick Page (who plays the Goblin with a gusto unshared by any other member of the cast) ad-libbed a warning to Reeve Carney(who stars as Spider-Man), who had been awkwardly marking time by pretending to drink Champagne.

“You gotta be careful,” Mr. Page said. “You’re gonna fly over the heads of the audience, you know. I hear they dropped a few of them.”

“Roar,” went the audience, like a herd of starved, listless lions, roused into animation by the arrival of feeding time.

Who knew that a musical about a comic book character would represent the true nadir of human entertainment – where we would be transformed into a group of bloodthirsty patrons paying a $100 for a live show in order to see the Broadway equivalent of a Christian being fed to a lion?

So the show has been re-written and now apparently all is supposed to be right with the world? I can’t be so forgiving. What we have here is a musical about Spider-Man that was essentially created in defiance of the original spirit of both Spider-Man the comic book, and the Broadway musical art form – where spectacle and a $75 million budget took precedence over a coherent story, the welfare of the participants and just the general escapism that theater and comics are supposed to give people. So while the producers and the mighty folks at Marvel, who are probably hoping against hope that a comic book turned musical will push new fans into the print side of their operations, are puffing their chest out about finally being at tonight’s opening, I say the bombast should be kept to a minimum. What has gone on around this show has been an utter embarrassment.

Long die the Spider-Man musical. Turn off the lights and go home.