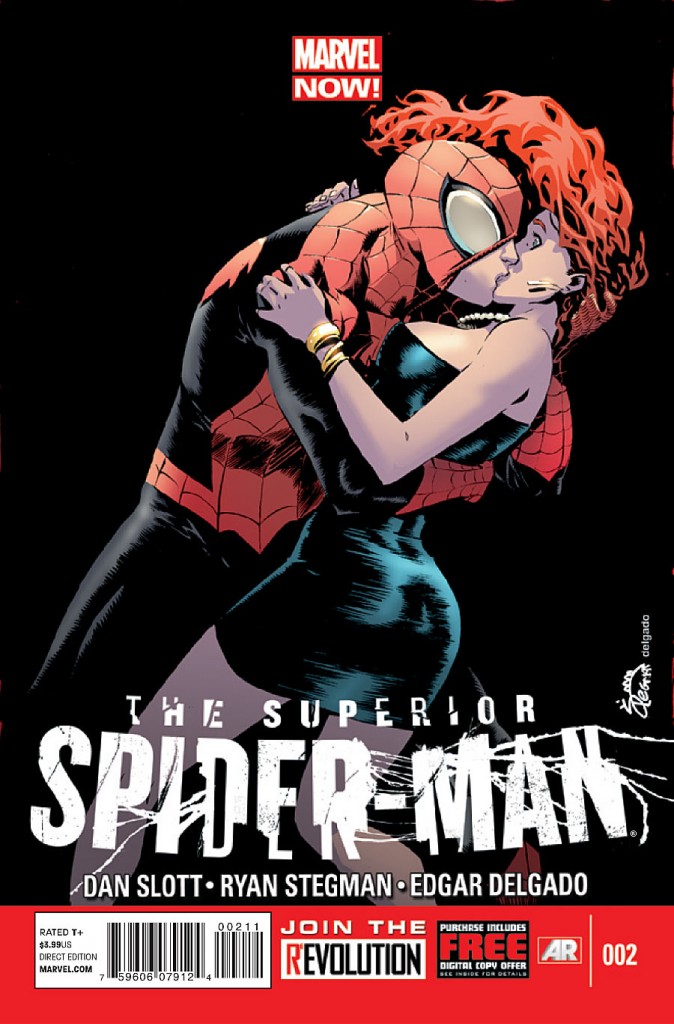 It’s rare for a comic book to bring me such joy and frustration simultaneously as Superior Spider-Man #2, but the heart wants what the heart wants, so while I can’t necessarily sing the issues praises from the rooftops like I did when the series debuted last month, I’m also in no position to get all “fanboy smash” about things like certain people seem to be doing in reaction to some of the irreverent dialogue and plot twists that have been introduced by the creative team.

No, this isn’t going to be a dissertation about “crazy town banana pants,” and whatever else Dan Slott and Ryan Stegman want to introduce as an homage to contemporary pop culture (one has to wonder what the Internet community would have thought about Peter Parker and Mary Jane in bell bottoms walking by Vietnam protestors during the 1970s). But there are some things that legitimately bugged me about this issue, while there was also plenty to keep me engaged for the foreseeable future.

Let’s start with the negative and work our way towards positive territory. Honestly, it all comes down to the portrayal of one character: Miss Mary Jane Watson. It’s really been so long since she’s been a truly consistent and omnipresent part of the Spider-Man universe that it’s just disappointing to see her being characterized the way she’s been since Spidey-Ock first made a move on her in ASM #700. Fortunately, Slott does put to the bed the Rich Johnston/Bleeding Cool-driven “was Mary Jane raped” debate by essentially avoiding the moral dilemma altogether by having Spidey-Ock opt out of perusing her romantically by issue’s end. But that still doesn’t change the fact that in a comic book that is centered around the idea that there is something “off” about the main character, there also seems to be something “off” about Mary Jane. Plainly, where’s her spark?

Going back to her very first appearance, there was always something very monumental about Mary Jane Watson. While it was clear for the bulk of her early existence, the powers that be were insistent that Peter was meant to be with Gwen Stacy, there is also an understanding that many ASM fans eventually grew “bored” with Gwen, and rightly so. While  her death was a traumatic moment that in many ways changed the way people crafted superhero comics going forward, can anyone honestly point to a storyline in the 20 or so issues that preceded ASM #121 where Gwen was anything but a contrived plot device used to constantly give Peter remorse for being Spider-Man? Eventually Mary Jane evolved past some flighty party girl and was the strawberry ice cream to Gwen’s vanilla. She was unique and marched to the beat of her own drum. Over time, she actually had her own origin story that added some depth to her character. Even after she and Peter were married, MJ was never content to just being the superhero’s accessory. She continued to pursue her own career as an actress and model. The only times the Peter/MJ coupling became stale, was when the creative team had nothing better to do than to resort back to a conventional Gwen Stacy-esque relationship with Peter. And then of course we have One More Day, which essentially eliminated the need for writers to think creatively about Peter’s relationship to MJ for the rest of time because what better way is there to resolve mediocre writing about their marriage than by just dissolving the marriage altogether? 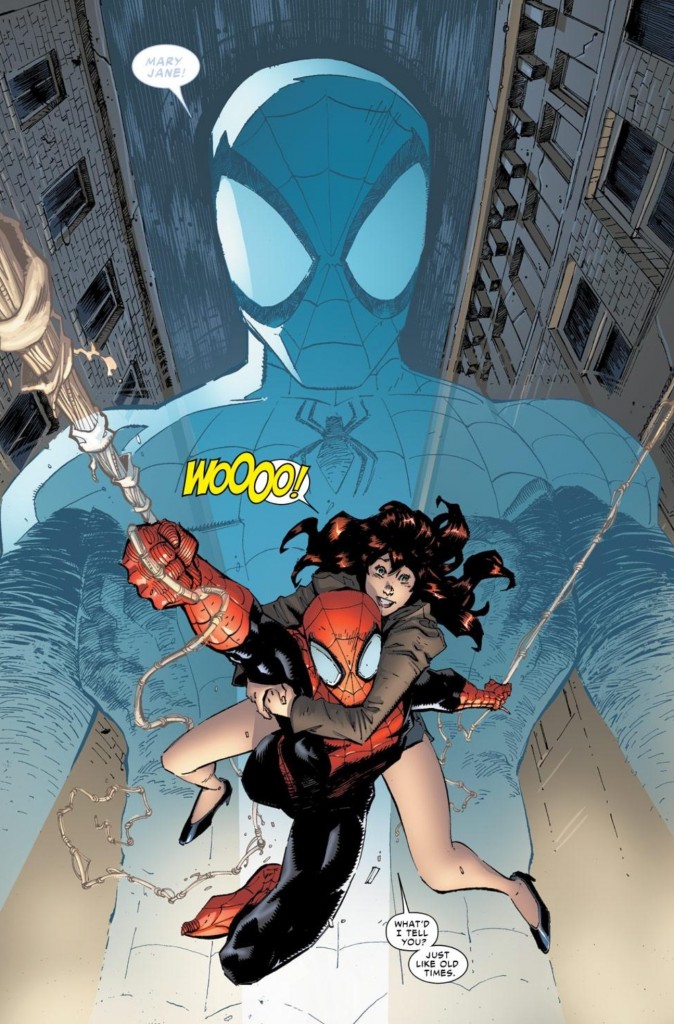 And that’s not saying I thought it was necessarily a bad idea to move on from the Peter/MJ marriage. The execution of its dissolution was a totally different kettle of fish, but I also understand how Marvel’s creative forces believed they had reached an impasse with Mary Jane and Peter. I be pressed to tell you a storyline post-OMD where I thought to myself, “what this comic needs is more Mary Jane.” And then Spider Island happened, and Slott captured the platonicness and wistfulness of the Peter/MJ dynamic so beautifully that I just wanted to take a mental picture of it and hold on to that moment forever. 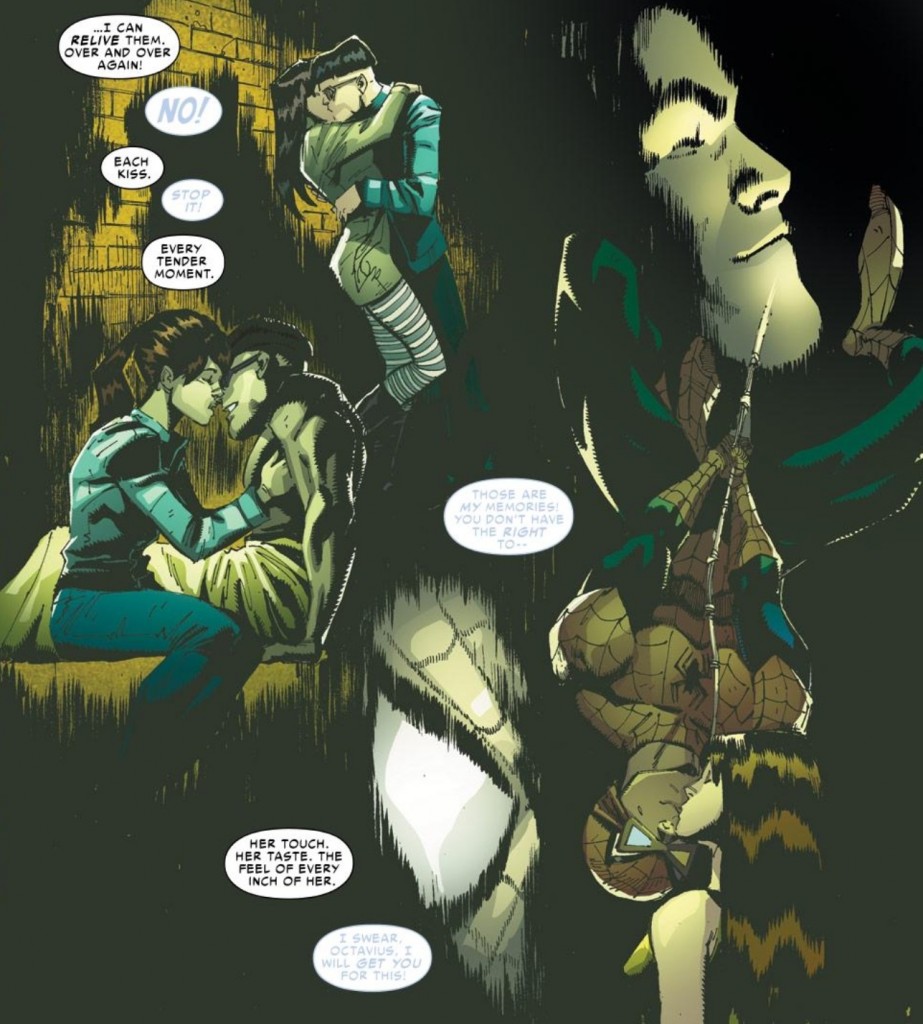 Sadly, I don’t know where the Spider Island version of Mary Jane went, but she certainly doesn’t appear to be present in the past three issues of ASM/Superior. I understand that Slott is trying to create some tension and drama here by having her come across so coy and docile, but I keep turning the pages in hopes we’ll get an authentically sounding “tiger” salutation, something with a bit of swagger and bravado, and it just reads like generic superhero girlfriend X. I know we’re not actually supposed to be rooting for Spidey-Ock and MJ to get together, just because of the ethical slippery slope it would induce, but at the same time I’m having a hard time grasping what Otto actually sees in this current characterization of “the Watson girl” other than the fact that she’s attractive.  Mary Jane Watson is one of the better supporting characters in the Spider-Man universe. If Slott and Co. are going to continue to make her the focal point of the Superior title, I just hope she regains some of her vitality and appears like less of a pushover around a guy, who she herself knows something isn’t “right” about. 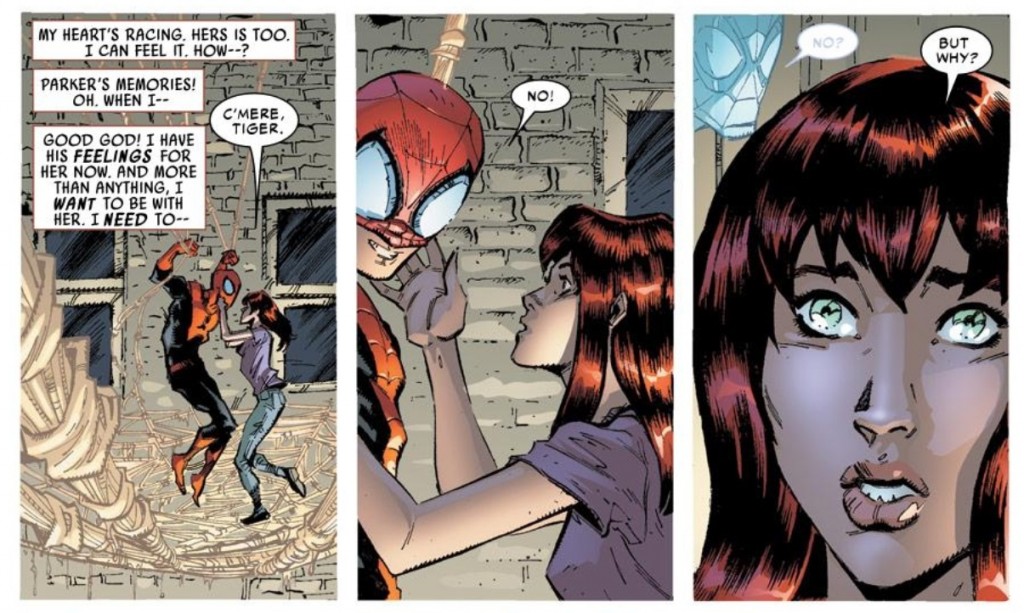 With that said, I’m actually really enjoying a comic book series about Spider-Man being told through the biased lense of Otto Octavius as Peter Parker. The concept lends itself to a lot of comedy, and each page is brimming with Slott and Stegman’s obvious joy. There are times when this issue and this series thus far, comes across as some kind of writing exercise – but in a good way (not in a self-indulgent, masturbatory kind of way, though hey, there’s even a few panels literally dedicated to Spidey-Ock doing that). All of Spidey-Ock’s little ticks, both physical and mentally/verbally are great. The homages to earlier scenes of Spidey’s history but with Otto in Peter’s place are brilliant. Overall, I honestly can’t remember when was the last time I had as much FUN reading a Spider-Man comic book and for that reason primarily, I’m going to stick with this series for the long-haul. It’s just that, I hope once Slott and Co. get through their bags of tricks, they creatively still find a way to stay true to all of the universe’s characters. Just because there’s somebody (mentally) new under Spidey’s mask it doesn’t give the creators carte blanche to paint the rest of the cast with brand new strokes – especially if those strokes make the characters a lot blander as a consequence.